FDI toward China: Japanese companies becoming more aggressive －Japanese cars sold well in the Chinese market, which will feature growth equivalent to more than 16% growth in the Japanese market －

Japanese car sales have continued to be robust in China.

In 2018, passenger car sales in the country were weak, as the tax cuts on passenger vehicles with engine displacements of up to 1.6 liters were discontinued at the end of 2017.

The cumulative results from January to November 2018 show that total unit sales of passenger vehicles fell 2.8% from a year ago, while those of vehicles overall including commercial vehicles also decreased, by 1.7%.

In contrast, total unit sales of Japanese cars during that period jumped 5.3% from the same period of the previous year.

Although year-on-year increases were achieved by Japanese, German (up 4.3%), and Korean (up 5.3%) carmakers, Koreans' positive results were just in reaction to the significant decrease they suffered in 2017. Therefore, it is only Japanese and German automakers that actually enjoy brisk sales in China.

All other manufacturers saw their sales decline from a year earlier: local Chinese makers, down 6.0%; American, down 15.9%; and French, down 27.2%.

(Note) The 2018 data are the cumulative results from January to November.
(Sources: MarkLines and CEIC)


Continuous favorable sales of Japanese automobiles are due primarily to the fact that the above-mentioned tax cut measures, which remained in place until the end of 2017, did not apply to most Japanese car models in the first place, and thus Japanese makers were relatively free from reactionary sales drop.

In addition, I believe that Japanese manufacturers' efforts over the past several years to meet growing needs of Chinese customers in terms of design, quality, price, etc. in a comprehensive manner have borne fruit.

Another reason is the virtual disappearance from 2016 onwards of anti-Japanese sentiment, which had remained an impediment to Japanese car brands since the outbreak of the territorial dispute over the Senkaku Islands.

Despite slow growth in 2018 dented by recalls, Honda's unit sales are expected to follow a steady upward path this year, with the negative impact of the recalls fading. Improving Japan-China relations will serve as another positive factor.

Japanese and German cars also enjoy high popularity in China's rapidly expanding secondhand market, as witnessed by their trade-in prices being higher than those of their counterparts from other countries.

High trade-in and resale values of Japanese used vehicles make new Japanese cars appear comparatively cheaper for Chinese consumers who are going to buy one but are planning to sell it in the future; I believe that this will provide a new boost to the Japanese automobile industry going forward.

A person well-versed in a leading Japanese auto manufacturer mentioned that it was highly likely that Japanese automakers' share of the Chinese market would increase from just under 19% at present to nearly 25% in several years.

It is said that of all investments made in China by Japanese corporations, approximately half have been made by automotive-related businesses.

The automotive industry includes an extremely wide range of companies from producers of materials such as iron and steel, aluminum, plastic, and glass, to suppliers of automotive parts such as engines, electronic components, tires, and interiors.

Those Japanese firms involved in a variety of fields supply their products not only to Japanese vehicle makers, but also to local Chinese automakers as well as European, American, and Korean automotive manufacturers operating in China.

Investments in China by those automotive-related corporations have been on the rise, spurred mainly by Japanese automakers' strong sales as mentioned previously.

Meanwhile, on the back of the sharp rise in labor costs in China, rationalization investments chiefly by Chinese corporations have increased and demand for robots and machine tools, fields in which Japanese companies have expertise, has continued to be firm.

Since July 2018, orders for robots and machine tools have suddenly dropped, hit by an escalation of the U.S.-China trade war, which had a material impact on many Japanese businesses.

However, given steady employment growth in China at present, it is highly likely that wages in the country will continue to rise on account of labor shortages.

Taking the above into account, I think that automotive-related demand as well as robot- and machine tool-related demand will remain solid over the medium to long term.

Due partly to this demand outlook, it is expected that Japanese companies involved in the above fields will continue investing aggressively in China.

On the other hand, Japanese corporations involved in other fields in general were said to have been negative about investment in China up until 2017.

However, I have often heard it said these days that they are now more willing to invest in China.

The first thing that Japanese companies considering revising their stance on Chinese investment do is consult with Japanese financial institutions to obtain necessary information.

I have heard from those persons that Japanese corporations' visits to China have been increasing significantly since 2018. According to them, of particular note is that not only do they visit China more often than before, but also an increasing number of individuals holding higher positions in company management hierarchy visit the country.

It is also noteworthy that the number of Japanese business travelers to major inland cities in China such as Chengdu and Wuhan, which were not very popular destinations before, has recently been on the rise.

Japanese corporations have traditionally exhibited a strong lockstep mentality to follow the party.

When anti-China sentiment prevailed in Japan and media refrained from publishing positive information about Chinese investment, a majority of Japanese companies incorrectly thought that interactions with the Chinese economy entailed significant risks and thus they did not consider doing business in China in earnest.

Unaware of the explosive growth of China's middle class and the accompanying sharp rise in potential demand for their products and services, most of Japanese corporations made no attempt whatsoever to visit the country to understand the local business climate.

Such a state began in September 2012 when the dispute arose over the sovereignty of the Senkaku Islands, and lasted until 2016. Starting from 2017, the situation has gradually changed, and in 2018, the value of Japanese firms' foreign direct investment (FDI) toward China increased definitely after a long period of decline (see Chart 2). 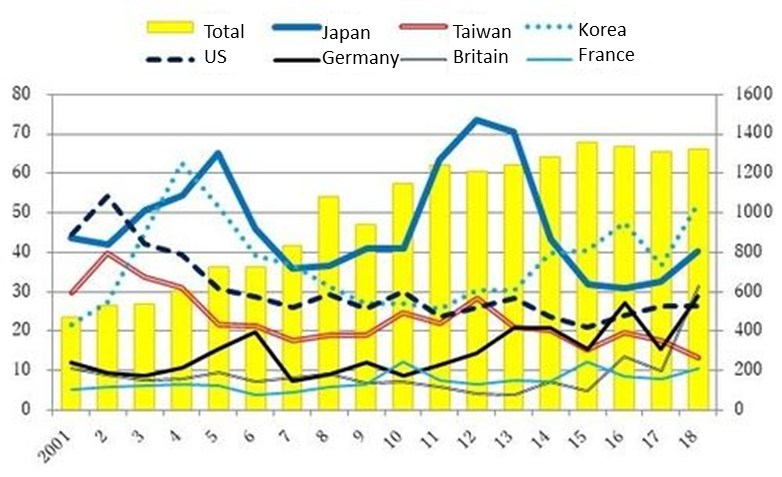 (Note) The 2018 data are an annualized figure calculated based on the year-on-year growth rate of the cumulative results from January to November.
(Source: CEIC)


Given that an increasing number of Japanese companies involved in the manufacture of automobiles, robots and machine tools and other industrial fields have made turnarounds in their attitude towards Chinese investment as described above, and along with the expectation that Japan-China relations will continue improving for a while, it is highly likely that Japan's FDI toward China will continue expanding for some time to come.

These results seem to contradict the negative attitude displayed lately by many European and American companies towards business in China. Then, what are the reasons for the contradictory results?

First, there is usually an approximately one-year gap between a compilation of statistics on FDI in China and actual investing activities.

However, in tandem with the pickup in domestic demand, foreign corporations' earnings have recovered since 2017. Accordingly, their attitude toward investing in China is considered to have become positive.

Second, it is since 2018 that European and American firms have rapidly grown wary of conducting business in China.

As it takes about a year for this change to be clearly reflected in statistical data, I believe that you will identify the change in the 2019 data onwards.

In addition, since the summer of 2018 the Chinese economy has entered a phase of mild deceleration, for the first time in a year and a half.

A further escalation of the trade war between the U.S. and China would exert additional downward pressure on the Chinese economy. Any impact of such a change in China's economy will be reflected in the 2019 data onwards as well.

Third, some European and American companies have continued to be positive about investing in China. A German petrochemical firm, a U.K. oil refiner, etc. have made huge investments in the country.

As the size of the Chinese market has expanded severalfold, foreign companies' sales and profits from business in China have soared.

Accordingly, highly competitive companies have made far larger investment in China than ever before. It is often the case that some companies' huge investments boost the value of FDI toward China by country.

Against this backdrop, there are some cases where even when a majority of companies in a country have toughened their stance on Chinese investment, the total value of the country's FDI toward China has grown, propped up by a few companies that remain upbeat on investing.

Due to the above reasons, it is believed that the value of investment by European and American corporations increased in 2018.

Looking ahead, I think it is highly likely that Chairman Xi Jinping will visit Japan when the G-20 Summit is held in Osaka in June this year.

With the aim of making good use of that opportunity, both Japan and China are expected to develop an array of cooperation projects and deregulation measures to further and powerfully promote private-sector economic exchanges.

These developments increase the possibility of Japanese companies being permitted to enter business areas, to which entry has traditionally been banned, and receiving preferential treatment, which they have been unable to enjoy so far, through deregulation, approval, and license.

It is also expected that a more favorable environment for investors including Japanese businesses will be established in China, as a result of strengthening of intellectual property right protection and easing of forced technology transfer; i.e., side effects of the U.S.-China trade war.

There is a strong likelihood that a better investment climate created by political factors such as improving relations between Japan and China and the trade war between the U.S. and China, coupled with the turnaround in Japanese firms' attitude toward investing in China as seen above, will increase their FDI toward China more rapidly in 2019 than ever before.

In 2019 it is forecast to grow at least 6%. The size of markets created by the GDP growth rate of 6% in China is comparable to that created by the corresponding rate of 16% or more in Japan.

Therefore, the Chinese market is expanding more rapidly for Japanese businesses than the economic growth rate shows it is, and the size of profits earned from the market is now much greater than before.

As described above, business success in China will have a far bigger impact than before on not only Japanese companies themselves, but also the Japanese economy as a whole.

Despite concern over China's economic slowdown and escalation of the U.S.-China feud, it is quite possible for Japanese corporations to earn huge profits, if they succeed in business expansion in the enormous Chinese market by implementing appropriate marketing strategies.

I hope that in 2019 an increasing number of Japanese businesses will make maximum use of these favorable market conditions and Japan will build further more obvious win-win relationships with China.

(This article was translated from the Japanese transcript of Mr. Seguchi's column published by JBpress on January 17, 2019.)