Kiyoyuki SEGUCHI
Research Director
1. The reason behind the Huawei case is that the US feels threatened by China

The shock arrest of Huawei's CFO (chief financial officer) came as a fresh and acute reminder of just how unfathomably deep the divide between the US and China is.

As US-China relations are now centered on the trade conflict, they are often expressed through the US-China trade war. However, the recent arrest has made it clearer that the current US-China trade war is different in terms of quality from the previous Japan-US trade war.

What the US as a nation ultimately places the most importance on is not economic matters, but national security interests.

This is because major US economic interests depend on the maintenance of a unipolar hegemonic system and that system is supported by the overwhelming military power.

At the beginning of the 1990s immediately after the end of the Cold War, Japan's GDP (gross domestic product) surged to 60-70% of that of the US and the trade dispute between the two countries intensified. Consequently, despite being an America's ally, Japan was treated by the US as if it had been its imaginary enemy.

At that time, however, it was just that the two countries' governments had been in tough trade talks and no one concerned was subjected to arrest.

When looking back over Japan-US relations, we may find that the Lockheed bribe scandal in which the former Prime Minister Kakuei Tanaka was arrested, as an event that could be considered to be slightly similar to the Huawei case.

It is believed that what lay at the bottom of the Lockheed affair was also security issues.

In other words, when any problem concerning national security arises between the US and another country, Washington deals more harshly with the problem than with any economic problem.

From this perspective, US-China relations cannot be separated from security issues.

China is not a US ally, adopts a different political system from that of the US, and is a completely separate entity in pursuit of national security.

In addition, China's economic power has increased year by year gradually approaching that of the US. If the country's economy continues to stay in the moderate and steady deceleration phase for over a decade or so, it is highly likely that China will catch up with the US in terms of GDP by around 2030.

There is also a good likelihood that China will overtake the US as the world's largest economy by around 2040.

An increase in economic power will inevitably lead to a proportional increase in military power.

Since the Chinese military has no experience whatsoever in modern warfare, it is highly likely that even if China's economy becomes as big as America's, America's military superiority will remain unrivaled over the long term, with the gap between the two countries in terms of actual warfare capabilities not narrowing anytime soon.

Nevertheless, China's expanding economic and military power definitely poses a threat to the US.

Because this lies at the basis of US-China relations, we cannot help but expect a relationship of tension between the two countries to continue over the long term.

What is behind the recent arrest of the Huawei CFO is such tensions in US-China relations. We should assume that it is highly possible that the same sort of events might recur at any time amid fraught relations between the two nations, which will continue over the long term.

On the other hand, China does not appear to be challenging American hegemony and unipolarity as seriously as the US fears that it is.

This is because in the face of severe domestic problems, China cannot afford to engage in a security strategy that challenges the US in the international arena.

In order to make up for low tax revenue, local Chinese governments have traditionally gained income from the real estate business, thereby financing their infrastructure projects.

However, this fiscal structure of local governments could lead to excessive real estate development, which will highly likely result in a collapse of the asset bubble and non-performing loan problems. If these risks materialize, it will be inevitable that China suffers a long-term economic downturn.

With a view to correcting these structural defects, China's central government is currently forging ahead with local government fiscal reforms and financial reforms.

Beijing ought to have embarked on these reforms more than a decade ago, but put them off for a long time due to concerns that they might seriously set back economic growth.

Aiming to solve this difficult problem, Xi Jinping's administration has started taking on challenges for reforms in full swing since the beginning of this year.

Against this backdrop, the Chinese economy has slowed as expected since last summer. However, not changing its policy of putting reforms first, Beijing has resolutely continued to work on reforms.

Why does China push itself so hard to tackle reforms?

As China is governed by one party, the Communist Party of China (CPC), it is crucial for the stability of the administration that the Chinese people continued support from all sectors of the public.

The actual and main reason why the vast majority of the Chinese people accept the CPC's rule at present is not because they support the ideology of the CPC, but because the CPC government has implemented and managed economic policy in an appropriate manner, thereby achieving long-term sustainable growth for the Chinese economy.

It goes without saying that if China were to suffer a major economic setback over the long term, the CPC would lose public trust.

If the CPC fails to maintain public trust, it is highly likely that the leaders of the CPC will be deprived of many different types of privileges that they have had, a serious problem affecting not only the leaders themselves, but also all of their family members and relatives.

Evaluating how severe this risk is so to avoid it, they cannot help but place the most emphasis on the promotion of the reforms which they are now working on.

Even if China's military capabilities do not catch up with US over the long term, it will have little effect on the foundation of the CPC's existence. However, destabilization of the domestic economy will give rise to serious internal problems.

It is clear what the CPC and China's government leaders place the most importance on.

3. The long-run decline in the economic power of the US and the advent of multipolarity

Nevertheless, if Beijing successfully achieves its reforms and maintains stable management of the economy over the long term, it will continue to grow steadily, as will the country's military power, whether Beijing sets store by it or not.

These developments will not only affect US-China relations, but also bring about a long-term change in the world order. More specifically, American hegemony and unipolarity will come to an end, and the world will inevitably move toward multipolarity.

The US was already aware as early as in the 1970s that such a change in the world order would occur sometime in the future.

This awareness has been further heightened since the beginning of the 21st century, and it is highly possible that Donald Trump's administration has been accelerating it.

As of the end of World War II, the US economy accounted for more than half of the world economy.

According to IMF (International Monetary Fund) World Economic Outlook database (October 2018), US GDP as a percentage of global GDP was at 28.2% in 1989.

Meanwhile, the above IMF outlook provides comparable figures for 2018 as follows: US, 24.2%; EU, 22.1%; Japan, 6.0%; and China, 15.9%, indicating that all countries and regions other than China experienced a significant drop in their shares (see Chart below). 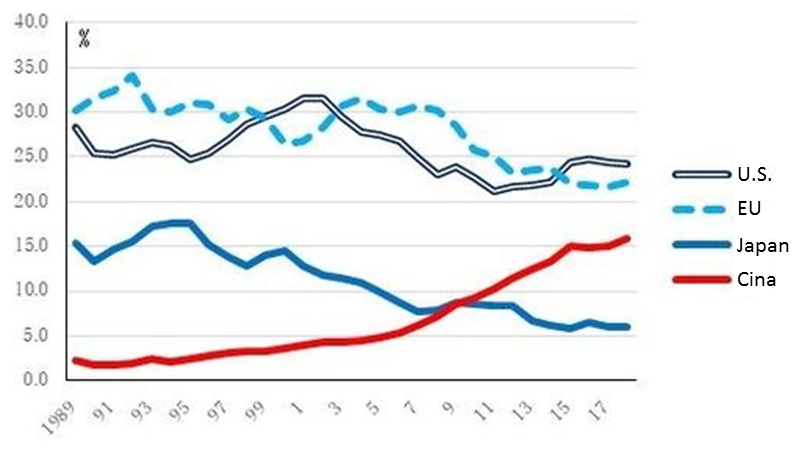 
These data show that the world order has gone through a sea change over the past 30 years.

Although the GDP figures change in line with changes in foreign exchange rates, there is no doubt that the US's share of the world's GDP has been on the decline from a long-term perspective.

It may be possible, depending on foreign exchange rates at that time, that the US's share will fall to about 20% by around 2030, while China's share will rise slightly to reach about 20% as well.

After that, if the GDP growth rate of the two countries falls short of that of the entire world, their shares will continue decreasing over the long term.

The US alone once accounted for more than 50% of world GDP, but the era is drawing near when the US and China together account for less than 40%. It will be the advent of multipolarity.

Any change to the US unipolar hegemonic system which has been supported by overwhelming economic and military strength will deprive the US of room for manoeuvre.

The US will feel more susceptible to threats posed by other countries' economic and military power, and it will become increasingly likely that Japan will be exposed to such risks again.

Such developments may lead to a relative weakening of the Japan-US alliance and increasing US pressure for Japan to shoulder more of the defense burden.

A relative decline in the position of the US in the world over the long term means that even if the country were to firmly maintain the US-Japan alliance, it will no longer be able to afford to take care of Japan.

Being a neighbor of China, the greatest threat to the US, Japan is an extremely important ally of the US in the implementation of its security strategy for the western Pacific region. However, China's growing military capabilities are expected to make the US unable to pay the expenses necessary for the maintenance of the security arrangements in the region.

As a result, Japan will be forced to gradually reduce its dependence on the US and regard efforts to secure defense forces on its own as the most important issue.

Under those circumstances, if the relationship between Japan and China is strained, Japan's self-help efforts to retain its defense forces will have all the more adverse effects on their relations.

By contrast, if the two countries can maintain close relations through a range of economic and cultural exchanges, they will be able to build a solid relationship unsusceptible to such changes.

To put it plainly, it is essential that we build a stronger Japan-China relationship in preparation for a gradual change in the Japan-US alliance in the future.

Considering the likelihood of the recurrence of events similar to the Huawei case, and the US stepping up pressure on Japan from this point onward, I think that it is extremely important for Japan to reinforce bilateral relations with China so as to avoid these security risks.

Sandwiched between America and China, Japan needs to make considerable efforts to maintain good and stable relations with both countries.

It is impossible for makeshift supportive measures to achieve a good balance among Japan, the US and China over the long term.

Japan should clarify its national principles together with basic strategies based thereon to proudly present them to the world, and walk in strict accordance with these principles on its own independent path while maintaining a certain distance from both the US or China, as a nation trusted by all countries around the world.

Acutely aware that the Huawei affair has provided us with a good opportunity to seriously think about which course Japan should take, Japan needs to determine policy directions as a nation as early as possible through exhaustive and cross-border discussions among intellectuals from political, bureaucratic, business and academic circles.

(This article was translated from the Japanese transcript of Mr. Seguchi's column published by JBpress on December 19, 2018.)