Despite economic slowdown, Japanese companies will strengthen their competitive advantage in the Chinese market －After maintaining steady growth, the Chinese economy has entered a phase of mild deceleration －

The Chinese economy has entered a phase of mild deceleration for the first time in a year and a half.

From the beginning of last year up to the first half of this year, the Chinese economy had enjoyed both employment and price stability, supported by the recovery of exports, private-sector capital investments and investments in real estate development, robust consumer spending, etc.

The Chinese macro-economy had remained the most stable it had ever been since the birth of the nation, with no other phase having ever seen all of the economic components, including employment and prices, simultaneously remain stable for such a long period of time.

Showing slight signs of a change in the third quarter of this year, the nation's economy, which had been marked by such steady growth now appears to have entered a phase of moderate decline.

Despite the economic changes that have occurred over a long period of time, the cooling in China's economy has not been very serious thus far.

The year-on-year growth rate of real GDP had hovered within the narrow range of 6.7-6.9% over the three years from the second half of 2015 to the first half of 2018. 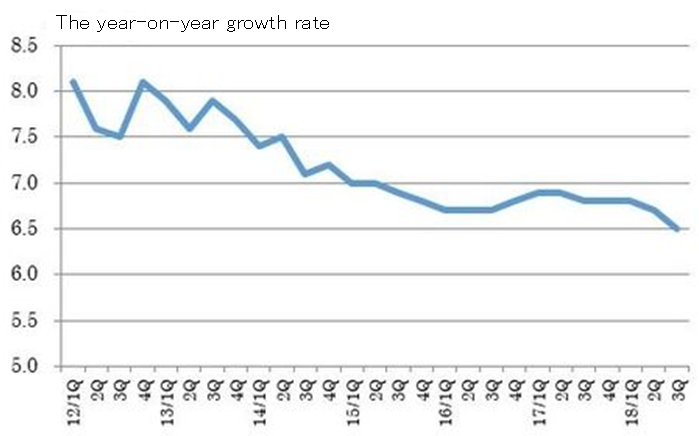 The era of high growth in China, which continued for 40 years since 1978 when the country's reform and door-opening policies began, is coming to an end.

A review of China's real GDP growth rate on a calendar year basis finds that it tumbled to as low as 3.9% in 1990 immediately after the Tiananmen Square incident, but had stayed above 7% since then up until 2014.

Many forecast that in 2019, China's annual GDP growth rate will fall and rack up a roughly 6.3% year-on-year rise, due mainly to slower increases in exports to the U.S. and private-sector capital investments.

2. Major factors behind the economic slowdown: side effects of the reform to prevent financial risks and the U.S.-China trade war

The Chinese government regards the promotion of the three key reforms as the most important task in the conduct of its economic policies for the three years from 2018 to 2020.

These reforms are aimed at: 1) preventing financial risks; 2) narrowing the gap between the rich and the poor; and 3) controlling pollution. The major cause of the recent slowdown in China's economy is related to the side effects associated with the promotion of the first reform to prevent financial risks.

On the fiscal front, policy measures to prevent financial risks have centered on bringing more rigorous discipline to the financing practices of local governments. Consequently, fund-raising activities by local governments have been curtailed and the pace of infrastructure development has decelerated rapidly.

On the financial front, the central government has strengthened the oversight and regulation of "shadow banking", online financial intermediation for borrowers (small and medium-sized enterprises, individuals, etc.) and lenders (general investors) known as "P2P lending", etc. conducted by financial institutions.

Unable to borrow enough money from banks on account of insufficient creditworthiness, small and medium-sized private enterprises cannot help but depend on shadow banking and P2P lending.

As the recent strengthening of oversight and regulation by supervisory authorities makes it difficult for private companies to get loans through such channels, many of them have begun to experience severe problems with cash flow.

These are the main reasons for the recent economic deceleration.

Meanwhile, the U.S.-China trade war has had little effect on China's macro-economy so far.

Anticipating that the U.S. government will raise China import tariffs, Chinese exporters have been boosting their last-minute exports to the U.S., as is witnessed by the fact that the country's exports to the U.S. between the first quarter and the third quarter of this year surged 11-13% from the corresponding period of the previous year.

However, concerns about the potential adverse effects of the trade war on exports to the U.S. have become one of the factors placing a downward pressure on stock prices.

In addition, the decrease in exports coupled with the aforementioned financing difficulty is forecast to lead to a deterioration of business sentiment and a subsequent sharp downturn in private-sector capital investments in the beginning of next year.

On the other hand, bond issuance by China's local governments is expected to increase gradually from this point onward, and infrastructure development is likely to pick up on the back of the increased financing.

3. It will be especially difficult to implement economic policies next year

As seen above, a look at China's 2019 economic forecasts causes concern that the side effects associated with the promotion of the reforms may continue to have a negative impact on local government finance and private companies, particularly small and medium-sized enterprises.

Furthermore, if the U.S. and China fail to compromise on trade and the U.S. imposes economic sanctions as planned, it will also weigh on the Chinese economy.

Nobody can predict how the Trump administration will deal with China from this point on and what impact it will have.

In order to offset the potential adverse effects of these two factors on the macro-economy to some extent, the Chinese government will implement economic stimulus policies on both the fiscal and financial front, thereby striving to ensure overall macro-economic stability.

It will be extremely difficult for Beijing to implement such economic policies, because it needs to fine-tune them from time to time, taking heed of uncertainties brought about by the Trump administration, as well as the degree of negative effects associated with the promotion of the reforms, in order to ensure the overall balance of the macro-economy.

Accordingly, they have agreed that they will not adopt fiscal or financial policies that stimulate the economy beyond what is necessary.

I think that those who manage overall macro-economic policies while placing emphasis on the promotion of the reforms have made a very good decision.

4. It will be positive for Japanese companies

As just described, the Chinese government is likely to have a tough time in implementing policy management next year.

On the other hand, I believe that 2019 will be a good year for Japanese corporations, as they are expected to find large business opportunities underpinned by some positive factors.

●First, political worries will subside as a result of a definitive improvement in Japanese-Chinese relations.

●Third, the automotive industry, the most prominent and largest of all Japanese industries engaged in Chinese businesses, will continue to enjoy strong auto sales.

●Fourth, it is highly likely that rationalization investments (in robots and other labor-saving equipment) of all capital investments will remain brisk.

●Fifth, Japanese-made high-end merchandise continues to sell well, for instance at China International Import Expo 2018 and over the Internet during "Singles' Day".

These are the key factors that will give a boost to Japanese firms doing business in China.

Considering these positive factors for Japanese businesses and the forecast that China's macro-economy will shrink only slightly in 2019, I believe it is highly likely that the former will completely offset the negative effects of the latter.

Global companies around the world share a common understanding that no other market on earth is as promising as the Chinese market over the next 10-15 years. And Japanese companies are particularly well-placed in this market.

In fact, since the beginning of this year, the number of Japanese firms dispatching their employees, and that of Japanese business travelers, to China has been increasing significantly. Moreover, an increasing number of company executives are traveling to China on business.

I have also heard that the number of students at Shanghai Japanese School, which had been decreasing since 2013, has once again begun to rise.

In light of these circumstances, we should think that despite the Chinese economy having entered a phase of mild deceleration, business opportunities for Japanese corporations in the Chinese market are expanding.

It goes without saying that not every Japanese company can enjoy brisk business in China, as there are a range of special factors for individual industries and regions.

However, Japanese companies in general should think that they will be able to find large business opportunities in China over the next 1-2 years, unless the U.S. government exerts extremely unreasonable pressure on the country.

(This article was translated from the Japanese transcript of Mr. Seguchi's column published by JBpress on November 19, 2018.)