Japanese companies losing investment opportunities; It is the duty of presidents to make bold decisions to face challenges based on their medium- to long-term management vision

In the autumn of last year, Japanese companies started to take a more positive approach than before to tackling business in China, as can be seen in the increasing number of business travelers from Japan to China for investment climate surveys.

Since then, they have continued to strengthen their efforts to expand their Chinese business.

A wide variety of industries such as automobiles, automotive parts, construction machinery, robots and machine tools, semiconductors, liquid crystals and smartphone industries are found to be performing well.

Reflecting the strong demand in the Chinese market, especially that for automobiles, automotive parts and semiconductor manufacturing equipment, Japan's exports to China in the first half of 2017 (statistics from the Chinese side) jumped 16% from the same period of the previous year, racking up double-digit growth for the first time since 2011 when a year-on-year increase of 10.1% was recorded (Chart 1). 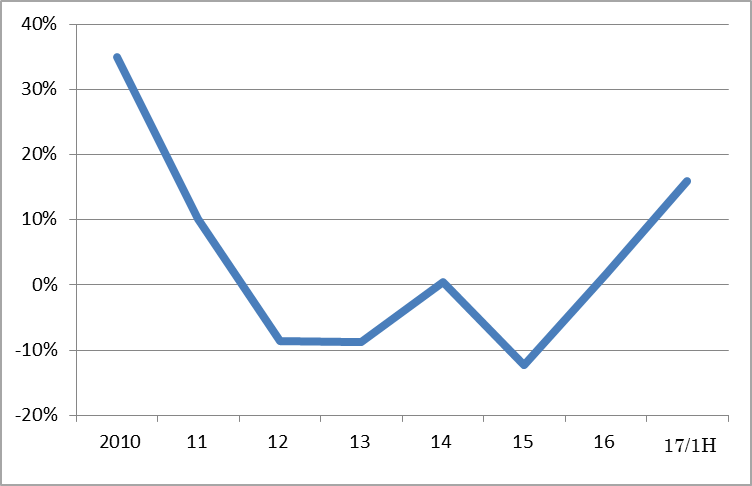 Source: CEIC; trade statistics from the Chinese side.

Reasons behind strong sales of Japanese cars and future expectations

While Chinese demand is expanding in a wide array of areas, that for automobile-related products, which are considered to account for about half of Japanese companies' Chinese business, is particularly robust.

One of the major factors that prompted Japanese companies to put more effort into Chinese business was an announcement by Honda in October 2016 that it would build a third factory in Wuhan.

Japanese automakers' unit sales-based passenger car market share in China has followed a steady recovery path since the beginning of this year (Chart 2).

In 2011, Japanese vehicles commanded a 19.4% share in China. However, triggered by anti-Japan protests over the disputed Senkaku Islands that erupted in September 2012 chiefly outside the Japanese Embassy and Consulates, the Japan-China relationship deteriorated to a level never before seen in the post war period. 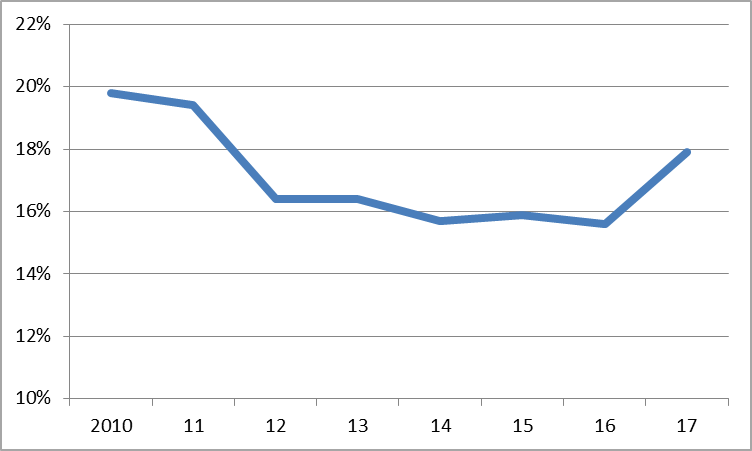 Due to the subsequent boycott of Japanese cars that spread across the country, Japanese automakers' market share in China plummeted to 16.4% in 2012, which had not recovered up until 2016.

However, with clear signs of recovery starting to be seen at the beginning of this year, cumulative unit sales of Japanese cars between January and August 2017 accounted for 17.9% of total vehicles sold during that period in China. The continuing recovery leads us to expect that Japanese automobile sales will return to levels before the dispute arose over the sovereignty of the Senkaku Islands.

Among the Japanese automobile manufacturers, Honda has shown outstanding performance. According to MarkLines, the company recorded double-digit unit sales growth rates (year-on-year) three years in a row: 32.5% in 2015, 24.0% in 2016 and 18.0% in the January-August period of 2017.

Meanwhile, Japanese-affiliated automakers sold 3.79 million passenger vehicles in China in 2016, and the number of such vehicles sold between January and August 2017 increased 16.7% from the same period in the previous year. If the current pace of growth is maintained, a total of 4.42 million vehicles are expected to be sold in by the end of 2017.

The number of vehicles sold in Japan reached 4.97 million in 2016, and the figure is forecast to surpass the five million thresholds in 2017. Nevertheless, Japanese automobile manufacturers are highly likely to sell more cars in China than in Japan in the year after next.

The following factors have been identified as contributing to continued strong sales of Japanese cars in China:

Firstly, favorable sales are attributed to the growing popularity of SUVs (sport utility vehicles) in China. Those manufactured by Honda and Nissan have been selling particularly well.

The second factor is the improvement of Japan-China relations. As Japanese-affiliated makers' automobiles are regarded as products representing Japan, growing anti-Japanese sentiment can easily lead to Chinese consumers' avoidance of Japanese cars.

Immediately after the outbreak of the territorial dispute over the Senkaku Islands, there was a spate of incidents in China where crowds smashed Japanese vehicles, spurred by a growing wave of nationalism in the country, and sales of Japanese cars nosedived.

In line with the subsequent gradual improvement in Japan-China relations, Chinese consumers have become insensitive to the risks associated with purchasing Japanese cars. Since 2015, the strong headwinds that the Japanese car industry faced have been subsiding.

In addition to the factors that support the ongoing strong performance of Japanese automobiles, there are also some other factors that makes the future look promising.

The first factor is a surge in used car sales. As China's used car market has remained underdeveloped so far, Chinese consumers have not acquired the habit of taking into account the future trade-in price of a new car they are going to buy.

However, used car sales have been expanding rapidly in recent years due to a sharp increase in second hand vehicles meeting current exhaust emission standards.

While the number of used cars sold in 2016 totaled approximately 10 million, the China Used Car Association expects the figure to reach the 30 million level by around 2020. In that case, most Chinese consumers will begin to consider the future trade-in price when purchasing a new car.

The trade-in and resale values of Japanese second hand vehicles are high because they maintain high reliability. This is the primary reason why Japanese automakers enjoy high market shares in the U.S. Considering that Japanese used cars are also popular in China, I believe the expansion of the second hand car market in China will provide an enormous boost to the Japanese automobile industry.

Secondly, although the Chinese government's policy to promote electric vehicle (EV) use was regarded as a negative factor for Japanese companies, it has come to be seen as a business opportunity for them due to the burgeoning demand for related products such as EV batteries, aluminum alloys and carbon fiber and weight-saving glass necessary to reduce vehicle body weight.

As mentioned above, the outlook for the Japanese automobile and automobile-related industries is bright.

In addition to automobile manufacturers, other Japanese companies engaged in a wide range of industries are also faring well, thanks to a rapid increase in the number of middle-income households and consistently strong demand for high-quality products and services in China.

Japanese companies' direct investment in China registered a negative year-on-year growth of 3.2% in the first seven months of this year. Although it was a slight decrease, the declining trend has continued since 2013.

Since changes in actual conditions tend to be reflected in these statistics with roughly a one-year lag, next year's new statistics reflecting current conditions may start improving.

Nevertheless, Japanese-affiliated financial institutions also point out that Japanese companies have yet to adopt as aggressive an investment strategy as they did back in the early 2000s.

Countries other than Japan such as Germany, Korea, France and the UK have been relatively active in their direct investments into China, although their investment stance varies across the years.

Keys to success are long-term vision and striving for innovation

Why do a lot of Japanese companies, despite a business opportunity right in front of their eyes, not take on new challenges?

One of the possible causes is an inability on the part of Japanese company managers, especially those of large companies, to use their own judgment or decide to quickly rise to the challenge when a business opportunity does come their way. Examples of Japanese managers' reluctance to tackle a challenge are often seen, not only in the Chinese market, but also in the domestic market.

Since the beginning of 2017, the tightening of Japan's labor market has accelerated and the country now suffers its most serious labor shortage since the 1980s.

And yet, most large companies are reluctant to raise the wages of their employees. There are also a number of companies which respond to higher production costs, not by passing them on to product prices, but by downgrading the level of customer service.

The reason for these corporate behaviors is anxiety about the future.

Nonetheless, Japanese companies are financially sound enough to take some drastic action, evidenced by the fact that a great deal of them reaped record-high profits in the previous fiscal year; they enjoy relatively ample internal reserves compared with their foreign counterparts; and their balance sheet has improved to a great extent.

Just increasing prices may result in customer defection as a matter of course, but if you simultaneously reinforce the added value through product or service innovations, the price increase is highly likely to be accepted by customers. However, Japanese companies that endeavor to take such measures are few and far between.

As I have just described, Japanese companies' behaviors in China and those in Japan seem to have one characteristic in common, i.e., to postpone judgments and decisions, despite a business opportunity right in front of their eyes.

The primary goal for executive officers other than the president in general, is advancements and promotions within the company. None of them therefore would take a big risk and dare try to talk the president into taking some innovative measures to grasp business opportunities.

They usually think it best to steadily improve the performance of business of which they are in charge, while taking only small risks.

However, as long as they continue to take this attitude, they cannot seize major opportunities.

In corporate management, it is usually the president alone who thinks seriously about the company's medium- to long-term development and a vision for the future to achieve development; evaluates management strategies; and makes a final decision to work toward particular goals.

Executive officers other than the president can give advice, but cannot make a judgment or decision in place of the president. If any officer voices a strong objection to a president who does not make judgments or decisions, he is highly likely to lose his executive position.

In other words, only the president is entitled to make judgments and decisions aimed at establishing a medium- to long-term management vision; taking on innovations necessary for the realization of the vision; and boosting corporate performance.

Present-day patterns of Japanese companies' behavior in the Chinese and domestic markets appear to show that presidents lack such leadership skills as seen above.

For a president to make a major decision, it is necessary to see frontline business firsthand and evaluate it for himself. However, it is rare that the president of a large Japanese company visits China to see the frontline of the country's market for him/herself.

Generally speaking, the president depends on other members of the top management team for their opinions and thus, it is difficult for him/her to create a medium- to long-term management vision by him/herself and make the final and bold decision to manage challenging situations.

It is often said that a non-owner president of a large company whose tenure is only about a few years tends to be indecisive when faced with a decision, because (s) he has too little experience in making judgments or decisions while serving as an executive officer before being promoted to president.

If such is the case, those who can act decisively may be found among founder presidents or presidents who have long served as president and rejuvenated their respective companies.

A lot of presidents of small and medium-sized firms must fall into this category. However, even non-owner presidents can act decisively with the courage to aim high.

I hope that competent presidents will exercise their capacity to make judgments and decisions, thereby rising to challenges in both the domestic and Chinese markets. I believe it will become the driving force behind revitalization of the Japanese economy.

(This article was translated from the Japanese transcript of Mr. Seguchi's column published by JBpress on September 21, 2017.)