Japan's Role in the future formation of World Order In a Destabilizing World, the Role of "Wa" Becomes Increasingly Important

Major organizations and frameworks for international consultation supporting the world order, such as the League of Nations, the United Nations, the Bretton Woods (International Monetary Fund (IMF)) system, the North Atlantic Treaty Organization (NATO), the European Union (EU), the General Agreement on Tariffs and Trade (GATT), the World Trade Organization (WTO), and the Group of Seven (G7), have all been established at the initiative of the United States and Europe after the first half of the twentieth century.

However, since last year, a series of movements have been made by major countries to withdraw from important organizations and frameworks that have been established by Western countries, as seen from the United Kingdom's withdrawal from the EU, and the United States from the Trans-Pacific Partnership (TPP) negotiations and the Paris Agreement.

Not only that, the European economy has continued to remain sluggish for an extended period, having been affected by the global financial crisis triggered by the collapse of Lehman Brothers in September 2008, and the lowering of its status will be further accelerated.

Meanwhile, in the United States, several months have passed since President Trump took office in January of this year, but his policy confusion in both domestic and foreign affairs has been greater than expected, according to many experts.

In addition, some point out that illegalities committed during the Russia-gate affair may be revealed, leading to Trump's impeachment.

However, the electoral districts in the United States are drawn in a way that is structurally advantageous to the Republican Party, making it extremely difficult to secure the majority votes in the House of Representatives required for the impeachment charge. Thus, the possibility of President Trump facing impeachment is expected to remain low.

If the current policy confusion continues in the United States over the next four years, the country's position in the international community would be further lowered, and many think that no matter what administration succeeds the Trump administration, it would be difficult for the United States to return to its past U.S.-dominated unipolar system.

The Trump administration is not the only cause

The slipping of the U.S. position in the international community did not start with the Trump Administration. At the beginning of the twenty-first century, the George W. Bush administration invaded Iraq and Afghanistan, but was not only unable to stabilize the Middle East, but was also not able to stop the spread of terrorism, which instead led to a worsening of the situation.

The Barack Obama administration called for the elimination of nuclear weapons, the withdrawal of U.S. forces from Afghanistan, the focusing on Asia, but none of these policies were achieved, and was unable to take effective measures against the Ukrainian crisis and European migrant problem.

For these reasons, the Obama administration received low ratings for its foreign policies, leaving a clear impression of the decline of U.S. leadership.

As I have described, after the beginning of the twenty-first century, both the Bush and Obama administrations had continued to deteriorate the confidence of the international community in the United States. The Trump administration is about to further accelerate this deterioration trend.

In view of the current negotiations on the United Kingdom's withdrawal from the EU in Europe and the policy confusion staged by the Trump administration in the United States, the possibility is extremely low for the situations in the Western countries, as described above, to improve in the short term.

If such situations should continue during the next few years, the basic framework of the Western-led world order formation that has lasted since the first half of the twentieth century will start to change fundamentally. With China and Russia participating as new major players, it is quite conceivable that the world will move towards multipolarity.

The important factors in forming world order are diplomatic and security powers and economic strength.

Economic strength involves various elements including industrial competitiveness, influence in finance and over the establishment of international rules, and cannot be simply measured by scale. Nevertheless, the simple scale of gross domestic product (GDP) is also one of the key indicators in determining economic strength.

According to the World Economic Outlook database published by the IMF, total GDP of Asia as a whole started to exceed those of both North America (U.S. + Canada) and the EU around 2010, and the gap between Asia and North America and the EU has been steadily widening ever since (refer to Figure).

The drivers of Asia's economic growth are the three countries of Japan, China and the Republic of Korea (ROK) in East Asia, whose GDPs account for almost eighty percent of Asia's total GDP. These three countries lead Asia's development in close cooperation with the Association of Southeast Asian Nations (ASEAN) and India.

Since it is quite unlikely that the economic growth trends in China, ASEAN and India will change in the short term, the recent trends are likely to continue in the medium to long term in the future. Accordingly, Asia's role in the global economy is expected to become increasingly important.

Furthermore, since the growth of this Asian region, beginning with China, owes greatly to the benefits of free trade supported by the WTO, Asian nations are well aware of the importance of the frameworks of free trade such as the TPP, Japan-China-ROK Free Trade Agreement (FTA), and Regional Comprehensive Economic Partnership (RCEP).

Given these circumstances, Asian nations are expected to increase their status in playing a leading role in global free trade.

[Figure] GDP of Asia, North America and the EU (Trillions of U.S. dollars) 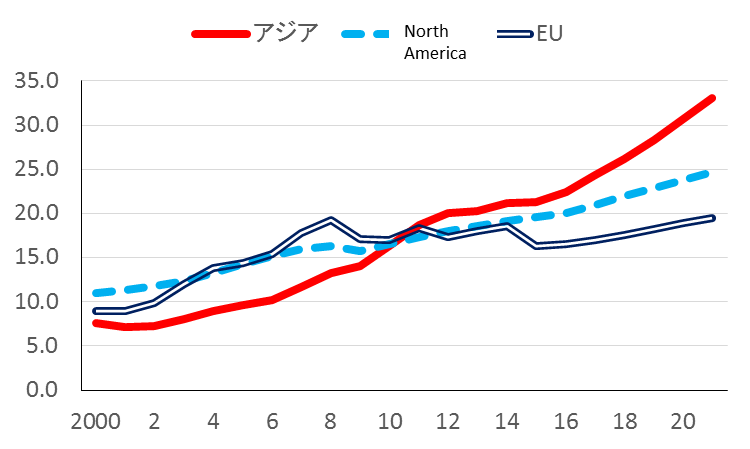 
Japan's role in the future formation of world order

As mentioned above, in the medium to long term, the framework of world order formation is expected to change, shifting from the existing U.S.-dominated unipolar system to a multipolar system.

Needless to say, amid such changes, Japan, which has kept pace with the United States in most of its foreign policies on the axis of the Japan-U.S. alliance must consider whether the country's foreign diplomacy should be maintained as it is.

Even if the United States' position declines, there is no doubt that in terms of security the situation in which the United States continues to exist as the world's dominant irresistible power will continue into the distant future.

The problem that must be considered is the growing risk of instability in the world order, as the formation mechanism of the world order in economy and diplomacy shifts from the existing U.S.-dominated system to a multipolar system that is participated in by major countries, such as the United States, Europe, Russia, China, India and Japan.

In such a situation, what role should Japan assume?

The basic premise is that the Japan-U.S. alliance will remain unchanged as the axis of Japan's foreign policy also in the future.

It's just that if U.S. leadership weakens while the framework of world order formation shifts toward multipolarity, it would become difficult for opinions to be consolidated, leading to the growing risk of drifting discussions with no conclusions being reached. This is what the instability of world order means. I would like to reflect on the role Japan should assume under such global conditions.

Japan has defense capabilities, but the country is based on the premise that it constitutionally upholds a special national policy in which it will have no military power for direct military interventions in international disputes. Although there are views that the very premise should be re-examined, I think that the premise should remain unchanged.

Since it is difficult for Japan to compete with the hard power that other countries possess, Japan should strengthen its soft power, placing emphasis on economic and cultural power. This constraint, I think, will serve as Japan's strength in the future.

In the twenty-first century, as globalization has taken place, chances have substantially decreased for developed democratic countries to exercise military power. It seems that the significance of military power and its position in settling international disputes is gradually changing.

After the Meiji Restoration, Japan, while being an Eastern nation, has built close relationships with Western countries, and has won a certain level of trust from both the East and the West.

Since ancient times, Japan has respected the philosophy of "wa" as part of its traditional spiritual culture. The philosophy implies the concepts of harmony, reconciliation and peace, and can be widely accepted also by today's global society.

Under the past U.S. unipolar system, the United States played the role of coordinator in global discussions.

However, if this role of the United States is weakened as multipolarity takes hold in the future, differences of attitudes among major countries will likely begin to surface. There are concerns that international talks will have difficulty in reaching conclusions.

When considering Japan's position in the world from such standpoint, my opinion is that Japan should assume the role of providing a platform of "wa" to foster mutual understanding and mutual trust among the major countries, and actively contribute to building consensus on the paradigm of world order.

Since this role is dependent on soft power, not only government institutions but private corporations and also individuals can cooperate and support the function of forming Japan's platform of "wa."

Because Japan has security constraints limiting its ability to contribute through the exercise of force, this way of using soft power based on public and private cooperation seems to be the most appropriate way for Japan to make a certain level of contribution to the world.

(This article was translated from the Japanese transcript of Mr. Seguchi's column published by JBpress on July 19, 2017.)