Has China Stopped Moving towards a Market Economy? ~Examining the realities of state-owned enterprises criticized by Western countries based on macro-economic data~

The article was originally posted on JBpress on September 18, 2020

Decreasing the ratio of state-owned enterprises is a prerequisite

The central and local governments in China are arbitrarily controlling economic activities and in a bid to dominate the global market, expanding and strengthening state-owned enterprises (SOEs) by leveraging government subsidies. Although Beijing declared when China became a member of the World Trade Organization (WTO) in 2001 as well as at the Third Plenary Session of the 18th Central Committee of the Communist Party of China in 2013 that it aimed to promote free competition through transition to a market economy and deregulation, virtually no progress has been made. This criticism is often heard in Japan, the US and Europe. However, I disagree with that view, because if the proportion of the total Chinese economy accounted for by SOEs continues to rise over the medium to long term, I think the rate of growth of the Chinese economy is likely to decline and the economy is likely to become more unstable. The management of SOEs or publicly-operated enterprises is inefficient, whether in Japan, the US or Europe. That is because they are not purely for-profit corporations and accordingly, it is considered acceptable to reduce their management efficiency to some extent for public purposes. Unlike in the case of private companies, corporate performance is rarely linked to employee treatment, and there is little incentive to increase profits. The same goes for SOEs in China. Their most important objective is to achieve the policy goals of the central or local government. In particular, giant SOEs under direct control of the central government, which make up about 60% of all SOEs in terms of both total sales and total profits, tend to set a great store by the policy goals of the state, and the top managers who have achieved significant results in this regard are selected as ministers of the central government or secretaries or governors of major provinces and cities. It is common for them to think that promotion within the government is more important than corporate profit growth or an increase in their own income. It is no surprise that companies with such a top management team are inferior to their private-sector counterparts in terms of earnings growth and management efficiency. Therefore, if the share of SOEs in China’s economy increases in a sustained manner over a long period of time, the average performance of Chinese companies will worsen, and serious problems in macroeconomic policy management, such as rising unemployment, declining wage growth and decreasing tax revenues, will come to the fore. The main reason why the Chinese Communist Party (CCP) continues to enjoy public support in China is that it has gained trust from the public by achieving high economic growth over a long period of time, making China the second largest economy in the world, and enriching Chinese people’s lives. If Beijing's economic policy management causes long-term economic stagnation and disappoints the Chinese people, confidence in the CCP will decrease and the CCP’s political base will be destabilized.

In order to avoid this, it is essential to continue to develop the Chinese economy in a sustainable and stable manner over the long term and maintain smooth economic policy management lest the people feel uneasy about their daily lives. The prerequisite for this is that the ratio of SOEs to the total economy continues to fall.

Will the decreasing trend of SOEs continue?

(Chart 1) Share of SOEs in Industrial Production, Investment and Employment 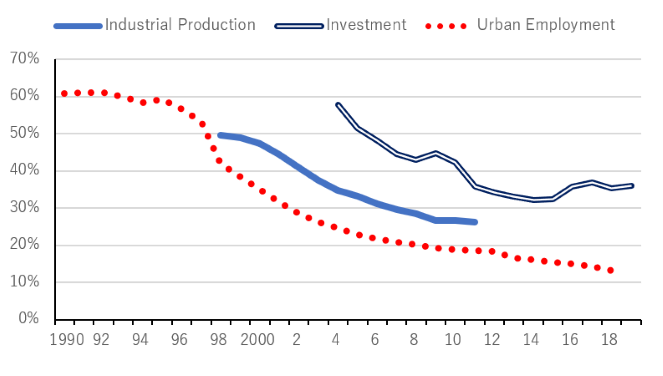 Note: Parts of the graphs are missing because there are no published data.

The only exception to the overall trend is seen in the ratio of SOEs in investment; it followed a downward path but appears to have picked up since 2016. This is a sign that the Xi Jinping administration’s policy of granting preferential treatment to SOEs has taken effect. Some observers say that the ratio of SOEs will continue rising from this point onwards, but my view is different from theirs. I believe the upturn is due to the special circumstances mentioned below that have arisen since 2016 and is not sustainable for the long term. China’s export growth rate (in US dollar terms) has been on a negative trend since 2015 on the back of the reduced competitiveness of Chinese exporters on account of the yuan’s appreciation (see Chart 2). Consequently, many managers of Chinese companies have become increasingly concerned about China’s economic prospects and cautious about increasing capital investment, which has led to a slowdown in the growth rate of private-sector capital investment. As a stimulus package to cover this, Beijing boosted investment in infrastructure construction in 2016. Since infrastructure construction is virtually dominated by SOEs, their investment increased in the same year. Thanks to the stimulus package, the prices of raw materials and energy in the global market rose and the prices of SOE products, mainly those in the heavy industry, increased. In 2017, seeing their profits recover and their capacity utilization rates improve, SOEs resumed expansion of investment which they had reduced up to that point. This is the reason why investment by SOEs grew in 2016 and 2017.

(Chart2) Trends in Exports, Imports and Trade Balance (in US dollars) 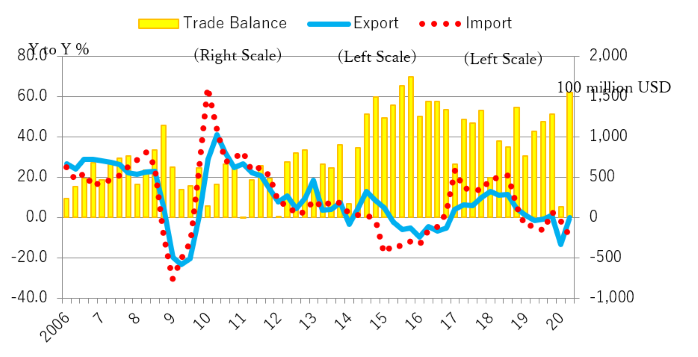 In 2018, private-sector capital investment recovered, supported by the pickup in exports and investment, and there was no longer a need to increase investment in infrastructure construction as pump-priming measures. With Beijing focusing on preventing financial and fiscal risks, local government investment in infrastructure buildup was curtailed, resulting in deceleration in investment by SOEs. In 2019, as the authorities tightened cash management in order to promote financial risk prevention measures, private companies, chiefly small and medium enterprises, experienced cash flow problems. Also due to growing concerns about the escalation of the US-China feud, capital investment by private companies decreased again, while that by SOEs increased relatively. In 2020, the growth rate of private-sector capital investment has continued to fall, as China suffered from serious economic stagnation in the first half of the year owing to the spread of COVID-19 and the global economy has continued to be in the doldrums in the second half, with the confrontation between the US and China growing increasingly severe. Given that investment in infrastructure construction is once again on the rise as stimulus measures to offset the economic slump caused by these factors, investment by SOEs is likely to grow at a faster pace than that by private companies. As described above, affected by special factors in economic policy management, it appears that the share of SOEs has risen since 2016. However, I think it is difficult to see this as a reversal of the long-term trend, because there has been no sign of recovery in the performance of SOEs. Changes in the amount of profits of SOEs and stock-based companies in the mining and energy-related sectors show that the amount of profits of SOEs increased little during the period from 2010 to 2019 (see Chart 3). This is in contrast to the fact that the amount of profits of stock-based companies, i.e. private companies, more than doubled during that period. The drop in profits of stock-based companies during the period in 2018 and 2019 is largely due to special factors, namely tighter capital controls by the authorities to prevent financial risk and slackened growth of exports and investment dented by the intensified conflict between the US and China. Stable operation of financial risk prevention measures together with the end of the escalating US-China confrontation and the coronavirus pandemic going forward will eliminate these special factors, and profits of stock-based companies are highly likely to start increasing again. Considering all of the points mentioned above, although the downward trend in the share of SOEs in investment appears to have reversed slightly in the last few years, it isexpected to continue decreasing over the long term as the Chinese economy returns to normal. 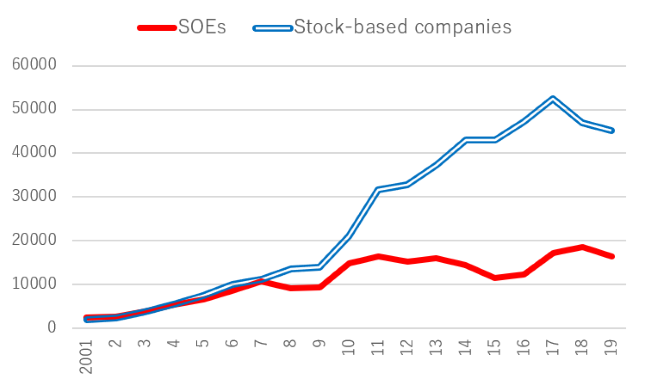 Other factors that facilitate the move towards a market economy

It is highly likely that private companies’ appetite for investment will recover and the ratio of SOEs will resume its downward trend over the long term, as the downward pressure on the economy owing to special factors such as the COVID-19 problem and the intensifying US-China dispute eases. In addition to the prospect of a decrease in the ratio of SOEs, there are a number of factors that will support the development of the private sector in the Chinese economy and
the progress of the nation’s transition to a market economy in the future.

The second factor is aggressive efforts to attract foreign companies.

Local governments across China have become more aggressive in attracting foreign companies since 2018.

This is in accordance with the policies announced by the central government to local governments, presumably due to the following circumstances:

1）Since the late 2010s, the outlook for the Chinese economy has become increasingly cloudy, attributable mainly to the slump in exports and friction between the US and China, which has led to a reluctance of local private companies in China to invest;

2）Stringent capital management carried out as part of financial risk avoidance measures constrain the expansion of investment by local small and medium private companies in China; and

3）With countries in Europe and the US feeling even more threatened by China, companies in those countries have somewhat lost their appetite for investment in China.

To offset the adverse circumstances described above, China actively encourages foreign blue-chip firms to invest in the country, expecting to produce positive economic effects, such as job creation and increased tax revenues, through the
expansion of investment across the country.

The third factor is the establishment of the Foreign Investment Law.

Against the backdrop of strong external pressure from the US, the Foreign Investment Law came into effect at the beginning of 2020 so as to improve the investment environment for foreign businesses and attract them even more strongly to China. The law stipulates a number of matters that foreign companies had been strongly urging the Chinese government to legislate on, such as those concerning strengthening intellectual property rights protection, banning forced technology transfers, notifying foreign companies, inviting them to make public comments and respecting their views before the central and local governments amend laws and regulations, and guaranteeing freedom of remittance to their home countries.

The fourth factor is promotion of financial liberalization.

Since 2020, financial liberalization has produced concrete results such as liberalization of the capital market and the easing of equity restrictions at the time of setting up foreign financial institutions, and the conditions for free competition have been improved. As seen above, the Chinese government appears to continue to focus on promoting free competition through the transformation of the Chinese economy into a market economy and deregulation. In my view, this is partly because Beijing wants to fend off strong external pressure from the US and de-escalate the US-China conflict. At the same time, it intends through these measures to improve the efficiency of the Chinese economy, establish a foundation for stable economic development over the long term, and stabilize the political power base. There is concern that from the mid-2020s onwards, China’s period of rapid growth will come to an end, the rate of growth will decelerate, and deterioration of SOEs’ performance will come to the surface, creating a huge fiscal burden. I would like to keep my eye on the Chinese government’s specific measures to see whether it can further downscale the current SOEs to alleviate the fiscal burden by that time.