Grain prices will suffer a slump in tandem with crude oil due to the coronavirus crisis: An inconvenient truth for those people fanning the flames of food crisis rumors

The article was originally posted on RONZA on April 26, 2020

The United Nations' World Food Programme (WFP) also issued estimates on April 21 claiming that the number of people who will struggle to obtain even the bare minimum amount of food required will double this year around the world, and could potentially reach 265 million people.

It is at times like these that experts fanning the flames of food crisis rumors are sure to step forward. In addition to domestic agricultural groups, international agricultural organizations will also attempt to use this to increase protections related to agriculture, as well as their budgets (Refer to "The false claim that rising global populations will give rise to food crises").

But will food crises occur as these international organizations are warning they will? Backing up, what sorts of countries would impose export restrictions and under what sorts of circumstances? What is it that goes into accounting for the current international market price for grain?

Unfortunately it seems that some people, including the personnel at international organizations, are spouting off arguments without an understanding of these basic facts. Or perhaps they are intentionally ignoring truths that are inconvenient to them.

Perhaps in place of food crises, we should instead worry that the novel coronavirus could have the effect of conversely causing a slump in grain prices.

The United States and other major countries are not instituting export restrictions.

Allow me to further elaborate this point by summarizing my previous article "Will the COVID-19 pandemic cause a food crisis?"

The most important agricultural produce included among foodstuffs are grain and soybeans, which serve to the sources of energy supplies.

It is claimed that the impact from the novel coronavirus will reduce the number of immigrants and foreign laborers, which will affect agricultural production. Yet while this will impact the production of fruits and vegetables, which are labor-intensive, it will not affect the production of grains, for which mechanization has been advancing. Even in Japan, fruit and vegetable farmers who have relied on foreign trainees have been sounding the alarm, whereas farmers who grow rice, wheat, and other grains have not batted an eye.

Developed countries like the United States, Canada, and Australia are the main exporters of farm products in the grain and soybean category, which include wheat, soybeans, corn, and so on. Looking at wheat reveals that they export the lion's share of their production output at 60 - 70% of this.

If these countries were to restrict exports, their domestic markets would be flooded with grains, which would cause prices to slump and thus a serious agricultural downturn. If the United States were no longer able to export soybeans to China due to the US-China trade war, it would have to resort to piling up vast quantities of soybeans out in the open on its farms because their silos would fill up. Other circumstances similar to this will arise if the U.S. stops exports. The United States in particular, which suffered major harm due to export restrictions in the 1970s, such as embargoes on exporting soybeans and embargoes on exporting grains to the Soviet Union, is not eager to impose export restrictions a second time.

While some people view Russia's export restrictions on wheat as problematic, Russia has only restricted exports over the second quarter to 7 million tons, down from 7.2 million tons from the same period of last year. Over the past several decades, Japan has imported 60% of its wheat from the United States, and about 20% each from Canada and Australia. Japan does not import Russian wheat, as it is of inferior quality. Russian wheat is often used as feed for livestock in Europe.

Rice is an exception even among grains. The countries that export it are developing countries like India and Vietnam, which have a tendency to impose export restrictions since they give preference to supplying it to their own impoverished citizens. The share that exports account for of total production output comes to 7% in India, 35% in Thailand, and 14% in Vietnam (in 2017), with only a small quantity diverted to exports compared to wheat and soybeans.

What is more, the international market for rice is a "thin market," in that it only has one-quarter the trade volume of wheat. The trade volume rises or falls substantially based on minor differences in a harvest. The fact that a marginal part of production is destined for exports results in unstable exports, and, coupled with the fact that its major exporters are developing countries, is the reason for why export restrictions tend to be imposed on rice.

Yet Thailand, which is similarly an exporter of rice, does not restrict exports since it is a high-income country. When it comes to rice, Japan would have no problem providing for its domestic needs even without importing it, to the point that it is even reducing its acreage for cultivating rice.

Export restrictions by India and other countries had an impact on the Philippines in 2008. Yet through Japan's initiative the Asean Plus Three Emergency Rice Reserve (APTERR) was implemented starting in 2012, and to date this has provided support for rice to the Philippines and other countries during emergencies. A situation like that of 2008 is unlikely to come about again.

The FAO and WFP should not just issue warnings that a crisis will occur, they should also learn from the specific measures Japan has taken in order to resolve matters of global food safety and security.

Warning that an enemy is approaching is all well and good, but how should you go about defending yourself if you don't take up arms against them? To prevent a food crisis from occurring, it will be necessary to raise income levels and set in place logistical infrastructure, but to what extent has this been carried out thus far?

The WTO is also claiming that export restrictions are a problem, yet what has the WTO done to date? Can it really contend that when India and Vietnam try to restrict exports in order to allow their own impoverished citizens to purchase food, that instead they ought to be exporting it even as people starve to death in their own countries?

Agricultural and marine produce has only accounted for a 13% share of Japan's food expenditures, even when imports are included in this. Even in 2008, when grain prices soared three-fold, the consumer price index for foodstuffs only rose 2.6%. Surely, nobody in Japan experienced a food crisis back in 2008.

Even if grain prices were to substantially increase, a food crisis will not occur in developed countries like Japan.

Will grain prices really end up rising this time around?

In all likelihood a situation like that of 2008 will not occur this time around. The reason for this is that the price of crude oil is falling.

The reason for why grain prices rose three-fold in 2008 is because the use of corn rose as a raw material for ethanol, which serves as a replacement for gasoline, due to assistance from the US government and the rising price of crude oil. Since the price of corn increased due to rising demand for it, this led to an interlinked rise in the prices of soybeans, wheat, and rice.

The soaring cost of crude oil had ripple effects on grain prices on the whole.

Take a look at the following graphs below. These indicate that grain prices have come to be interlinked with the price of crude oil, with this trend having only grown stronger in recent years (Source: Sekai Keizai no Neta Chou (Global Economic Database)). 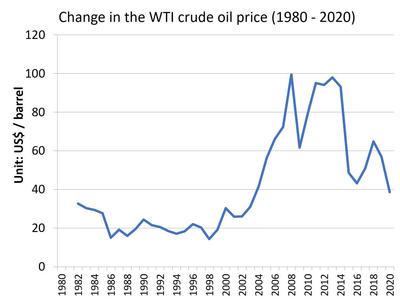 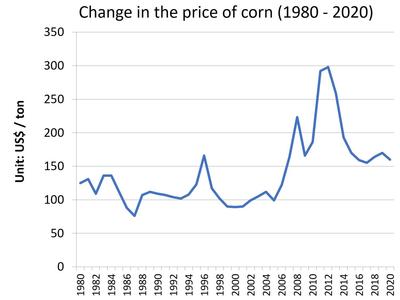 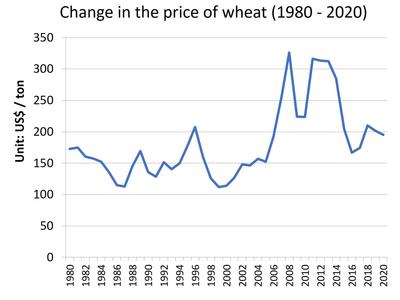 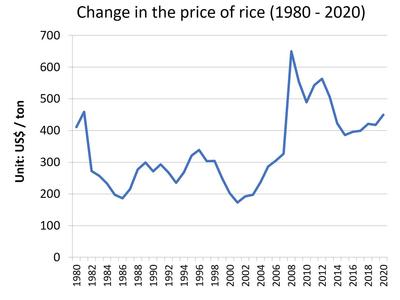 
The United States is both the largest producer and exporter of corn. At one point the majority of this was used as feed for livestock. In order to reduce its dependence on crude oil from the Middle East, the United States began producing ethanol under the New Energy Policy by the Carter administration. However, its production had been sluggish, and there was only a marginal increase in the production of corn for ethanol.

Yet due to a recent shift in the United States' energy policy, it has increased the production of corn for ethanol by approximately five-fold over the past 15 years or so. Currently, about the same amount of corn is used for ethanol as is used for animal feed, with these two uses having come to account for more than 70% of total corn usage (while no more than about 10 - 20% of its corn production is exported, this still accounts for 50 - 70% of global exports).

Through ethanol, demand for corn has come to be largely connected to the supply of and demand for crude oil.

Currently the price of corn, which had been trending steadily between 380 and 400 cents per bushel from October of last year to March of this year, has fallen down to 315 cents a bushel. This is half the price it once was between 2011 - 2013, when it was around 600 - 800 cents a bushel.

In the United States the livestock industry, which is a major purchaser of both ethanol and corn, is being affected by the novel coronavirus. Just like with wagyu beef consumption in Japan, the closure of restaurants and other factors has led to a decline in demand for animal products. In addition, conditions are arising in which large-scale meat processing plants are being shuttered due to mass infections among their workers. If livestock production were to decrease due to factors on both the demand and supply sides, then demand for the corn (as well as soybeans and wheat) that serve as feed for animals will also decline.

When there is a drop in the price of corn, which is heavily impacted by the ethanol and animal feed that account for 70% of its end uses, then this affects the prices of other grains and soybeans due to the fungibility of their production and consumption.

But when the price of corn falls, planting could potentially also decrease. However, since both the corn price and that of crude oil, which is an important production factor, are also falling at the same time, this effect will be limited. For the time being, prices for grains and soybeans will likely remain in a slump.

The opposite phenomena and mechanisms are at play compared with those from 2008, and the drop in the price of crude oil could potentially lead to substantial declines in the prices of corn, soybeans, wheat, and rice. The effects of the novel coronavirus are cutting down on work, and could potentially decrease the income and revenue of people in developing countries. However, the drop in grain prices will offset this effect.

If the prices of certain grain commodities were to rise on account of special supply and demand conditions, consumers should just increase consumption of other commodities whose prices are dropping. This is different from how it was in 2008, when the prices of everything rose.

It is possible that a state of affairs that is the exact opposite of a food crisis will come about.