Japan gaining recognition from the international community, but standing on shaky foundations The solution lies in moral education: Suginami City launched its initiative ahead of others

The article was originally posted on JBpress on Decemebr 17, 2019

Gap between Japan's international reputation and its reality

The UK leaving the European Union and Donald Trump becoming president of the US were both caused by wavering confidence in the elite who had so far run the country, and intensifying social divisions against the backdrop of expanding gaps between the rich and the poor.

As symbolized by these phenomena, social instability has recently increased in Europe and the US, and the dire situation continues with no clues found as yet.

By contrast, as Japan maintains relative political and economic stability, it is increasingly being recognized as the most stable nation of all developed countries.

Nevertheless, I think it's a common view shared by many intellectuals that the stability enjoyed by Japan at present is not the result of any great efforts exerted by the Japanese government or Japan's business community over the past several years.

The long-running administration led by Prime Minister Shinzo Abe certainly serves as a major contributing factor, but it is widely thought that Abe staying in power is only because the opposition parties are hopeless and thus there is no other option.

On the political front, while countries all around the world are concerned about Japan's accumulated budget deficit, the government has not tackled the issue of social security, the main cause of the deficit problem, seriously. Only scandals involving Moritomo Gakuen, Kake Gakuen, and Sakura wo Miru Kai (cherry blossom viewing party) appear to become the center of attention.

Although it augurs well for Japan that discussions about pension payments, health benefits for the elderly, school budget expansions, etc. have started in recent years, there is still a long way to go toward a fundamental solution for the grave problems faced by Japan.

Looking at Japan's business community, meanwhile, we find the largest companies representing Japan are struggling financially, as is witnessed by the fact that the TOPIX Core 30 Index, which is composed of 30 of the largest companies of the stocks listed on the First Section of the Tokyo Stock Exchange, tumbled about 20% compared to April 1998.

Managers at a majority of leading Japanese corporations are now less motivated to promote innovation and expand into new overseas markets, and consequently, the number of Japanese firms included in the ranking of the world's largest companies has decreased significantly.

And yet, Japan is considered stable. One of the major reasons behind this is that the gap between the rich and the poor is not widening, and the entire society is morally stable.

This is thanks largely to strenuous efforts made not by leaders, but rather by middle-class people.

Polices and administrative institutions come under pressure to deal with these problems, but it's hardly likely that the situation will improve, if they continue taking makeshift measures without eliminating the root cause.

It is clear that the moral degeneration of society will lead to a diminished quality of human resources supporting Japan's stability, and the severe problem of destabilizing and weakening Japan's economy and society over the long term. Maybe I should say that it has already started to turn into a severe problem.

For a fundamental solution to this problem, it is necessary to raise moral awareness and put it into practice by improving moral education at school. However, the situation facing schools has been rapidly deteriorating over the past several years.

According to statistics released by the Ministry of Education, Culture, Sports, Science and Technology (MEXT) in October 2019, there has been a sharp rise in the number of school non-attenders over the past several years. 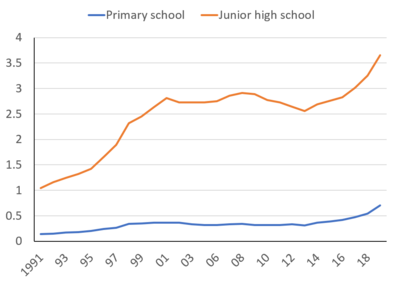 【Chart 2】 Trends in Number of Non-Attenders as Percent of Total Students (Units: %) 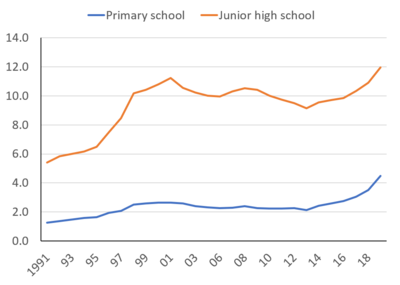 (Note) As used herein, "non-attenders" means out of the number of students who are absent from school for 30 consecutive days or more, or a total of 30 days or more, in one academic year, those who miss school due to truancy (source: MEXT's website; schools subject to survey are state, public and private elementary and junior high schools). Truancy refers to the situation where a student is, or is forced to be, absent from school for some psychological, emotional, physical, or social reason and background (excluding reasons related to sickness and economic reasons).

Stated differently, the problem of truancy originally suffered by junior high schools is recently spreading among elementary schools as well.

Major causes of truancy include trouble getting along with people at school such as problems in relationships with friends and bullying. Of particular note is the significant increase in the number of both elementary and junior high school students who miss school due to lethargy and anxiety.

Although schools are taking measures to deal with this situation such as increasing the number of nursing teachers, school counselors, advisors and other experts, it appears to be rapidly getting worse. 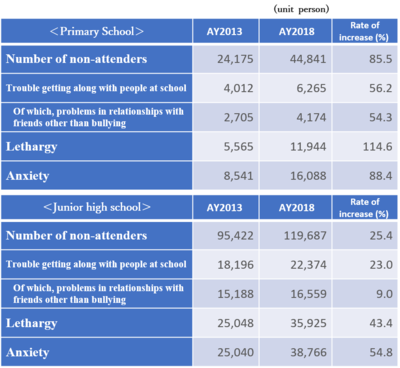 The above data clearly shows that makeshift countermeasures against the problem are not very effective.

In order to solve the problem at its source, it is extremely important to give students the energy to live, and to make them more compassionate toward others and more humane through significant enhancement of moral education at kindergartens and nursery, elementary and junior high schools.

Some regions are tackling the problem head-on.

Suginami City, an advanced region representing Japan in terms of education, is promoting an educational continuity program from preschool through early elementary school levels and has established a "Preschool Education Support Center," thereby striving to help children from early childhood to make basic life habits, develop a healthy mind and body, as well as autonomy and self-discipline, learn kindness and cooperation, and improve other aspects of their character.

Suginami City had used local taxpayers' money to set up a unique teachers' training school called "Suginami Shihankan" (Suginami Institute for Teacher's Training) from AY2006 to AY2010 to cultivate eminent teachers through a curriculum that focused on moral education.

Serving as an assistant to the Director of "Suginami Shihankan," I was engaged in the management of the institute for two years, and even now regularly participate in graduate support events held annually.

Every time I take part in such an event, I realize the importance of moral education at school as well as having human resources who are deeply aware of its significance being active on the educational front.

It's true that we cannot help but take makeshift measures over the short term to cope with the deepening educational crisis. But from a long-term perspective, I believe that the most effective way to solve the problem at its source is to improve the students' characters through enhancing moral education.

As the restructuring of moral education is directly linked to a far-sighted state policy, the Prime Minister needs to take the initiative in changing the way that all citizens, politicians, business administrators and academics think about the issue.

To make sweeping changes to the state and corporations, Hatsuran Hansei撥乱反正, Sogyo Suito 創業垂統and Keitai Shubun継体守文 are the royal road that we should take.

Hatsuran Hansei means to bring disorder in the world under control and return the world to a sound footing, i.e. to sweep away everything old-fashioned.

Sogyo Suito means to build solid foundations for a new organization or framework we create, which could turn into a tradition we leave to posterity for many years to come.

And Keitai Shubun means to securely inherit that tradition and develop it while maintaining the unique advantages of the state and of corporations.

In accordance with these principles of organizational reform, we need to first make a zero-based review of the entire existing Japanese educational system and fundamentally rethink what we should do to cultivate high quality human resources.

To that end, it is essential that we confront the important history issues caused by Japanese leaders since the Meiji Restoration to date, such as the Pacific War and the Sino-Japanese War, and think about the educational and human resources development systems required so as not to repeat the mistakes.

It is absolutely necessary that we reflect on the consequences of the vital decision-making of the past and hold exhaustive discussions about the root question, i.e. what country Japan should develop into going forward.

It's a big problem that current school education provides few opportunities to discuss, such a root question concerning the state and society.

There might have been some measures to avoid or mitigate the wars against the US and China. At least, we could have avoided suicide missions, honorable defeats in various regions, civilian casualties in Okinawa, etc.

It is extremely important that we squarely consider these vital questions concerning the past, reflect on our conduct, and think of what to do so as not to repeat the same mistakes.

What is necessary when considering those questions is the attitude of taking note of how others are feeling and doing our best to work for others, as expressed by phrases, "Shisei Sokudatsu至誠惻怛" (sincerity and empathy toward persons in need and willingness to help them in every way possible) and "Bunshi An'an文思安安" (consideration remaining steady and calm).

It is when we face our past history squarely that our unshaken attitude is put to the test.

At the same time, we need to reflect on the disastrous consequences of developing human resources based on the hierarchical education system with the Imperial University placed at the top, which was adopted after the Meiji Restoration. That is to say, we have placed too much emphasis on learning Western science, and consequently, we now have few human resources capable of thinking deeply about what the state should basically be.

It is often pointed out that compared to the leading spirits of the Meiji Restoration with their high aspirations and good judgment of the situation, the quality of our human resources has since deteriorated.

Concurrently examining the root cause of the recent social divisions and wavering policies in Europe and the US, we must rebuild the education system that will support Japan over the next 100 years and establish a human resource development system based on moral education.

When we think of the image of Japan in 100 years' time and improvement of moral education to support it at the beginning of the Reiwa Era, we need to look back over past history, deeply regret our mistakes, and re-examine the courses Japan should take from a fundamental and long-term perspective.

As long as we continuously take makeshift measures and avoid tackling the root problem squarely, the day of Japan's revival will never come.