Japanese agricultural policies destroying the world's most sustainable paddy field farming - There is no soil erosion, groundwater depletion, salinization or replant failure; paddy farming is a perfect solution for achieving the SDGs

The article was originally posted on Webronza on December 31, 2018

Since the "Sustainable Development Goals" (SDGs) were set by the United Nations (UN), the Japanese government has been endeavoring to promote the SDGs through measures such as setting up the SDGs Promotion Headquarters led by Prime Minister Abe and holding conferment ceremonies for the "Japan SDGs Awards" which are presented to leading initiatives by autonomous communities and private companies.

There are quite a few companies that claim to be actively engaged in the promotion of the SDGs. Passionately pursued, the SDGs seem to have become a kind of a fashion.

Has Japan striven to promote food security and sustainable agriculture so far?

Grains are the most important foods/agricultural products in our diet, as they provide us with a good proportion of our energy requirements. The world's grain cultivation is divided into two groups: paddy field farming to produce rice and dryland farming to produce wheat, corn, etc. The former is carried out mainly in the Asian monsoon region including Japan, while the latter, mainly in Europe and the US.

In Monsoon Asia, the annual rainfall is concentrated in summer, which is the rice growing season. In Europe, on the other hand, summer rainfall is not enough for rice to grow. However, as precipitation is spread evenly through the year there, they have become focused on dry farming (wheat) that utilizes rainwater.

Nevertheless, one grain of rice produces far greater yields than its wheat counterpart. This is the very reason why, despite covering only 14% of the world land area, the Asian monsoon region produces enough food to feed 60% of the world's population.

Paddy field farming involves extremely sustainable farming practices. After traveling to Japan, Korea and China in 1909 and marveling at the fact that in contrast to American agriculture, which caused massive soil erosion in just several decades, paddy field farming had been carried out in those countries on a sustainable basis over several thousand years to feed a large number of people, Franklin King, a professor of the University of Wisconsin in the US, wrote a book titled "Farmers of Forty Centuries or Permanent Agriculture in China, Korea and Japan." Even now, "F.H. King Students for Sustainable Agriculture," a student organization working in Professor King's honor to promote sustainable agriculture at the University of Wisconsin, conducts energetic activities.

In dryland farming, a phenomenon called replant failure occurs, where planting the same crop in the same field season after season can lead to decreased yields over the course of several years. In order to avoid this problem, crop rotation, a practice of growing different types of crops in the same area over a sequence of seasons, for instance, corn in one season and soybean in the next, has been implemented.

By contrast, there is no replant failure in paddy field farming. Even if rice is planted in the same field season after season, it does not lead to decreased yields. Crop rotation is not necessary.

It is regrettable that Europeans and Americans know very little about paddy field farming. When I attended a seminar the other day, I was dumbfounded by a Canadian farmer who maintained that Japan's rice-growing was a problem because it was a monoculture and that Japanese farmers should produce a wide variety of agricultural products through crop rotation for the sake of the environment as well. His argument from ignorance and tinged with arrogance was so naïve that I could not bring myself to refute it.

In countries and regions across the world involved in dryland farming such as the US and Australia, there is a growing concern over sustainable production due to "soil erosion," "groundwater depletion" and "salinization" (salt accumulation).

The artificial application of external water to farmland is called "irrigation." Some irrigation areas are found suffering from such problems as depletion of water resources including dry rivers and a reduction in groundwater levels attributable to excess water intake and pumping and salinization resulting from inappropriate irrigation in arid climates.

On account of excess water intake for irrigation, etc., one-fifth of the Ogallala Aquifer, an underground reservoir located beneath the Great Plains in the US, has disappeared, while rivers in China such as the Huang He (Yellow River) have run dry.

When combined with irrigation and poor drainage, the salt content in the soil dissolves in water not escaping from the soil. Further application of irrigation water causes the surface water seeping into the ground to be linked to saline groundwater by a capillary phenomenon and dissolved salts to rise to, and accumulate at, the soil surface. As more water evaporates on sun-drenched dry land, the build-up of salt in the soil surface makes the land look as if it were covered with snow.

Long ago, the Mesopotamian civilization was brought down by soil salinization. Even nowadays, the Aral Sea in Central Asia, which was once the fourth-largest lake in the world, shrank to 10% of its original size after the rivers that fed it were diverted by the former Soviet Union's irrigation farming projects. In addition, as a result of farmers having washed away the salts accumulated in nearby farmland, saline water flowed into the lake and turned it into a dead sea which was so salty that many fish species could not live in it. The shrinking of the Aral Sea is described as the world's worst environmental disaster in the 20th century.

For plant growth, soil must have the contradictory properties of water retention to supply plants with water and aeration to allow them to breathe. This is called soil aggregate structure. A soil aggregate is an assemblage of organic matter, microorganisms, etc. Fertile soils having this structure exist only in the layer called "topsoil" whose thickness on Earth's surface is about 30 cm. Many plants cannot grow in soils that do not have the aggregate structure.

However, it is estimated to take 200-300 years to form 1 cm of topsoil. This means 30 cm of topsoil has developed over a long period of time of 6,000-9,000 years. Loss of the topsoil is almost tantamount to abandonment of the production capacity of agriculture.

In America, deep tillage of topsoil through the use of large machines has been carried out, and the use of special-purpose machinery, which is designed to be used for production of particular agricultural products, has increased. Consequently, an increasing number of farmers have shifted to monocultures, where cropland is prone to the hazards of soil erosion, while it is left bare exposed to wind and water after the crop has been harvested.

By means of water, paddy fields receive nutrients from forests, and rinse off germs and salt, thereby preventing flow of nitrogen to groundwater, replant failure and salinization. In other words, paddy fields have "let the problems drift away with the water."

This is the reason why, over as long as 7,000 years, rice farming has successfully continued season after season along the Yangtze River in China without replant failure. Moreover, rainwater-laden paddies prevent the loss of topsoil through rain and wind erosion.

Increasing rather than depleting water resources, rice farming in Japan is environmentally friendly agriculture. Rice growing in paddy fields is the most "sustainable agriculture" in the world.

The fact that rice paddy fields account for more than half of arable land in Japan indicates that Japan's agriculture is far more sustainable than its European and US counterparts.

Nevertheless, the Japanese government has continued adopting the gentan (rice acreage reduction) policy for as long as 50 years, which has not only dissuaded farmers from using paddy fields as paddy fields, but also destroyed them. Rice-paddy acreage had been on the rise since the end of World War II to peak at 3.44 million hectares in 1970 when the gentan policy began. However, it has continued decreasing since then to reach 2.41 million hectares at present.

Under the pretext of improving the income of the vast majority of rice farming households, the government had quadrupled the price of rice, primarily Japanese-made rice, from 1960 to 1990. Meanwhile, the price of wheat, chiefly imported wheat, had been kept the same. From the relative price perspective, the government raised the price of domestically available food (rice), while reducing the price of imported food (wheat). Therefore, it was quite natural that rice consumption declined, whereas wheat consumption increased, resulting in a drop in the self-sufficiency rate in our nation's food supply.

Rice production has been falling in tandem with lower rice consumption. Japan previously produced more than 14 million tons of rice a year, but the annual production volume has nearly halved to just above 7 million tons. It has currently carried out production adjustments corresponding to 5 million tons, in order to keep rice prices high by reducing the supply of rice.

On the other hand, Japan imports as much as 8 million tons of wheat annually. Japan makes no attempt to produce the food products which it can produce all by itself. It runs counter to not only the efforts to promote sustainable agriculture, but also the SDGs seeking solutions to achieve food security. 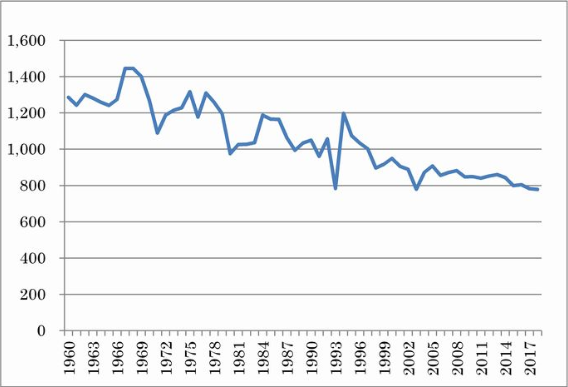 As I have repeatedly pointed out, "discontinuation of the gentan policy" is fake news leaked by the Prime Minister Abe's office (refer to "No More of the False Report of Abolition of the Gentan Policy!"). Even now, in order to prevent rice prices from falling, the farming industry, mainly the Ministry of Agriculture, Forestry and Fisheries and the Japan Agricultural Cooperatives (JA) organization, strives to discourage farmers across the country from increasing production of rice, a Japanese staple food. This has created a situation where demand for cheap rice from the food service industry is not met.

The Japanese government burdens extremely sustainable rice cultivation in paddies by implementing the gentan policy, while promoting American and other countries' agriculture, which is questionable in terms of sustainability, by importing agricultural products from them. And these policies gain overwhelming support from the farming industry centered on the JA organization.

If the Abe Cabinet deals largely with relatively minor SDG-related issues, while turning a blind eye to major issues necessary for achieving the SDGs, they are just taking a populist approach and I doubt if they are serious about tackling the SDGs. What do you think about it?


(This article was translated from the Japanese transcript of Dr. Yamashita's column in "Webronza" on December 31, 2018.)