Prices of cheese will not go down: Economic analysis of the Japan-EU FTA

What has been agreed?

A focal point of the latest negotiations over a free trade agreement (FTA) between Japan and the EU was how to handle tariffs on cheese. The two sides have agreed: (i) to phase out tariffs on hard natural cheeses like Gouda (from which processed cheese is made) as under the TPP; and (ii) for soft natural cheeses like Camembert and Mozzarella (for direct consumption), (a) not to reduce or eliminate ordinary tariffs; but (b) to phase out in-quota tariffs on cheese imported within a low-tariff-rate import quota over a 16-year period (initial tariff levels for the quota has not been made public). In other words, the EU will be able to export the set amount of cheese to Japan with low tariffs but it will have to pay the current tariff of 29.8 percent for the portion exceeding that amount.

The import tariff-rate quota for soft natural cheeses will be set at 20,000 tons for the first year and increased to 31,000 tons in the 16th year. This quota is not so large. For one thing, Japan currently imports 68,000 tons of natural cheese from the EU annually, of which 18,000 tons of cheese, which is apparently of a soft type, come from France and Italy. Cheese consumption is on the rise in Japan, for another.

Prices of cheese will not fall, nor will the EU's exports rise

Japanese media reports explained that the agreement will result in lower retail prices of cheese and significantly affect dairy farmers in Japan. This kind of explanation was made not only by the newspaper of the Japan Agricultural Cooperatives (JA) group, but also by national newspapers. One such paper cited a JA-affiliated agricultural economist who is concerned about possible adverse effects on domestic dairy farmers. However, anyone who has some knowledge of basic economics would understand that such things will not happen: imports of cheese will not increase, nor will domestic cheese production be affected.

The figure below shows the supply-demand relation in the current domestic cheese market. 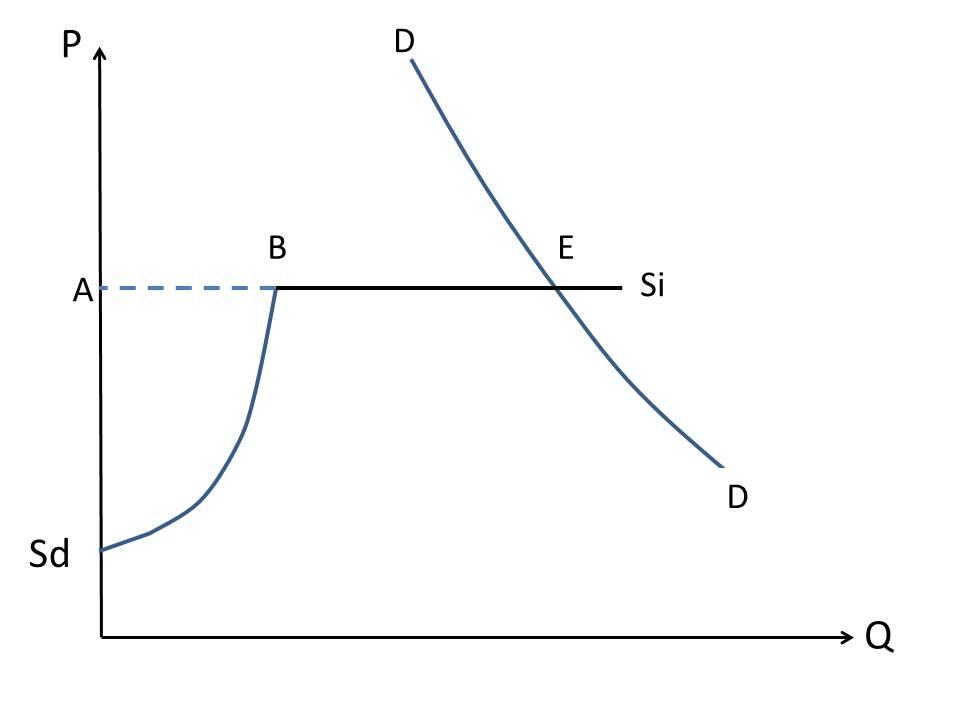 As far as domestic cheese is concerned, when the price falls, production will decrease as the amount of raw milk that can be supplied at the reduced price will also go down. Conversely, when the price rises, production will increase. Thus, the supply curve of domestic cheese slopes upward. By contrast, the supply curve of imports is presumed to be extremely elastic as cheese is abundantly supplied at fixed prices, given that annual production within the EU alone amounts to seven million tons. (A purchase of nothing but several tens of thousand tons of European cheese by Japanese trading houses will not increase prices in the EU.)

The figure below shows the addition of the supply curve BC that represents the import supply within the agreed low-tariff-rate import quota. The supply-demand equilibrium point E remains unchanged. As the price remains unchanged, the supply of domestic cheese will remain unchanged as well. The Japanese government plans to take additional protective measures, arguing that the agreement will affect domestic dairy farmers. This is something that should not be done because domestic dairy farmers will not be affected at all. Total supply, which equals total demand, remains unchanged as well, and so does the supply of imported cheese. The only change is in the breakdown of imported cheese: imports within the low-tariff import quota as represented by BC, and imports subject to an ordinary tariff of 29.8 percent as represented by FE. The agreement will not benefit cheese producers in the EU at all. The above conclusion remains valid even after the 16th year, when the in-quota tariff will be eliminated altogether. The only change in the figure will be that BC will shift downward.

Imports within the low-tariff-rate quota as denoted by BC fetch the same price as that for imports subject to an ordinary tariff of 29.8 percent. Any domestic producers receive the same price. Apparently, Japanese newspapers and JA-affiliated agricultural economist alike believe that cheese imported within the low-tariff import quota will be distributed at lower prices in the market. They do not understand the simple economics that the single price prevails for the same product regardless of the difference of costs of supply. 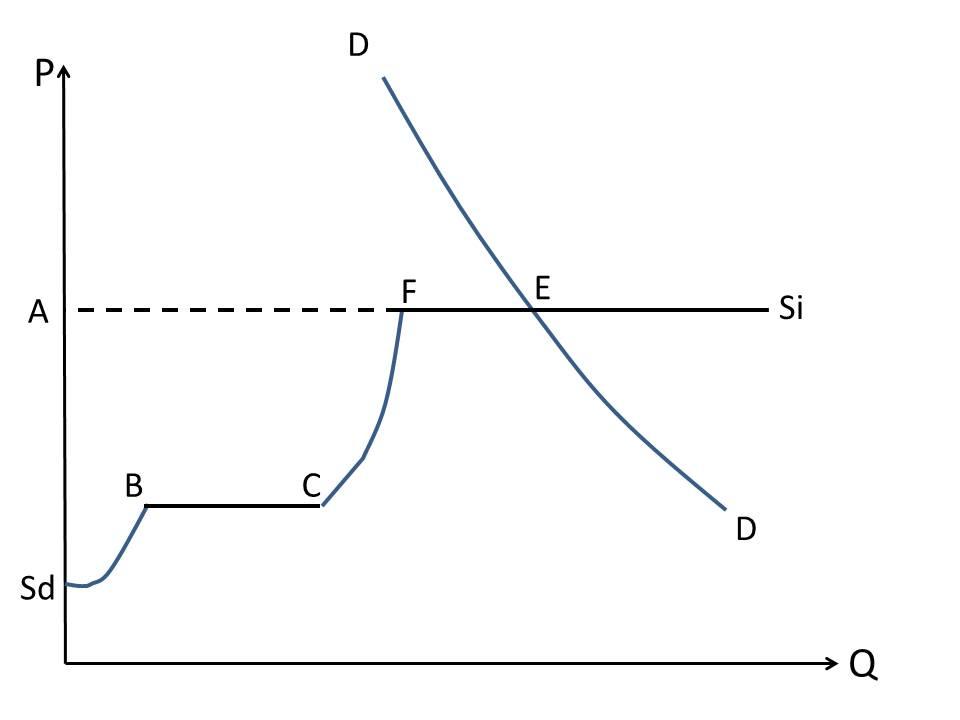 Of course, if the amount of imports within the low-tariff-rate quota BC is sufficiently large, the price will go down. In the figure below, the equilibrium price will fall to E'. This fall in price will both reduce the production of domestic cheese and eliminate altogether imports subject to an ordinary tariff of 29.8 percent. Imports within the quota as denoted by BC will surpass the increase in demand associated with the fall in price. The agreed import quota is not so large, however. 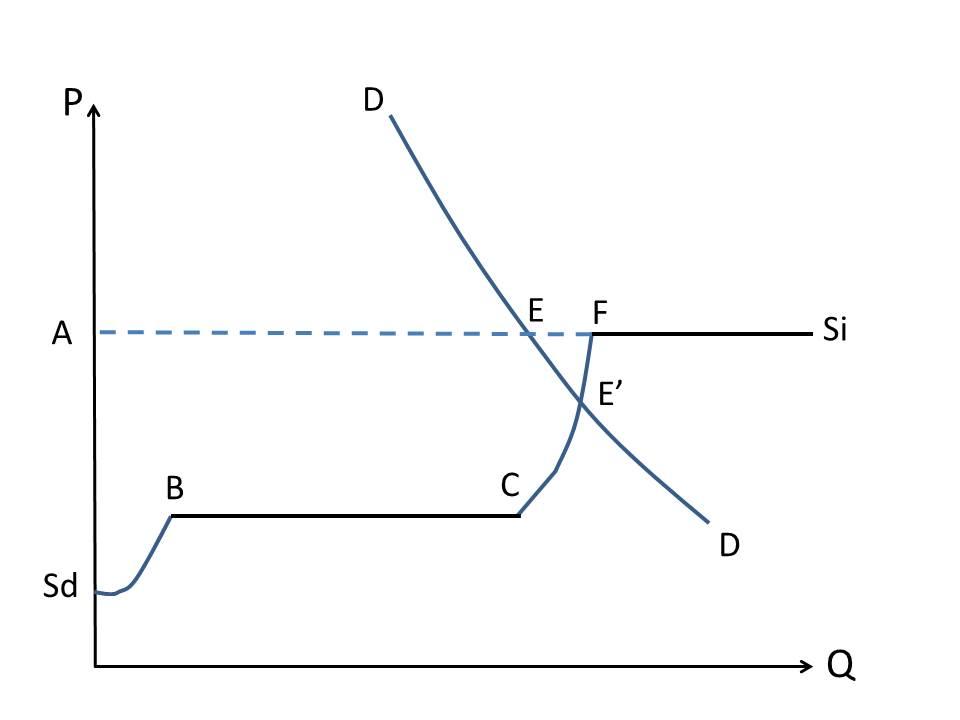 Who will benefit from the agreement?

If the low-tariff-rate import quota does not allow the EU to boost exports to Japan, who will benefit then?

In either of the first two options, the difference in price between cheese imported with a 29.8-percent tariff and cheese imported subject to a 10-percent tariff goes into the pockets of importers. When the unit import price is 1,000 yen, for example, a unit domestic sales cost is 1,298 yen for the former and 1,100 yen for the latter, with the difference being 198 yen. This is because there is no need for an importer to sell the product for 1,100 yen in a market where it is sold for 1,298 yen. If the importer sells the product for a lower price to a retailer, the retailer will benefit by selling it for the same price for other imports. Such an import mark-up is known as "rent" in economics.

In the third option, an importer bids for the amount equivalent to the difference between 198 yen and the profit margin for it. In this case, the rent is collected by and accrued to the Japanese government.

The first two options have long been criticized as lacking transparency. In fact, they invited wrongdoing over interests in the past as the rent belonged to importers. They were widely practiced when the import quota system was common. (The system was supplanted by a tariff system in the GATT Uruguay Round negotiations and is now prohibited under the WTO). It is thus likely that the bidding option will be taken. In fact, import quotas for rice and other products are allocated through bidding. In short, it is the Japanese government that will gain the rent from the low tariff-rate quota. It will not be better off, however, since it receive this rent in the form of tariff.What makes the agreement distinct from the past negotiations on the liberalization of trade in agricultural products?

I doubt that negotiators at the Ministry of Agriculture, Forestry and Fisheries were so insightful as to have this logic in mind. It has been their set pattern to manage to pull through by imposing a low-tariff-rate import quota when they fail to lower tariffs, as in the cases of skimmed milk powder, butter, and rice.

These cases, however, differ from the case of cheese on one important aspect. For the former, the ordinary tariffs equivalent to more than 200 percent ad-valorem tariff rates virtually prohibit imports (such tariffs are known as "import-prohibitive" tariffs), which means that imports within a low-tariff-rate import quota, if ever imposed, cannot logically replace the virtually non-existent imports that are subject to these prohibitive tariffs. For the latter, however, a tariff of 29.8 percent is so low that cheese subject to this tariff has been imported to Japan. Then imports within a low-tariff-rate import quota will replace actual imports under an ordinary tariff. 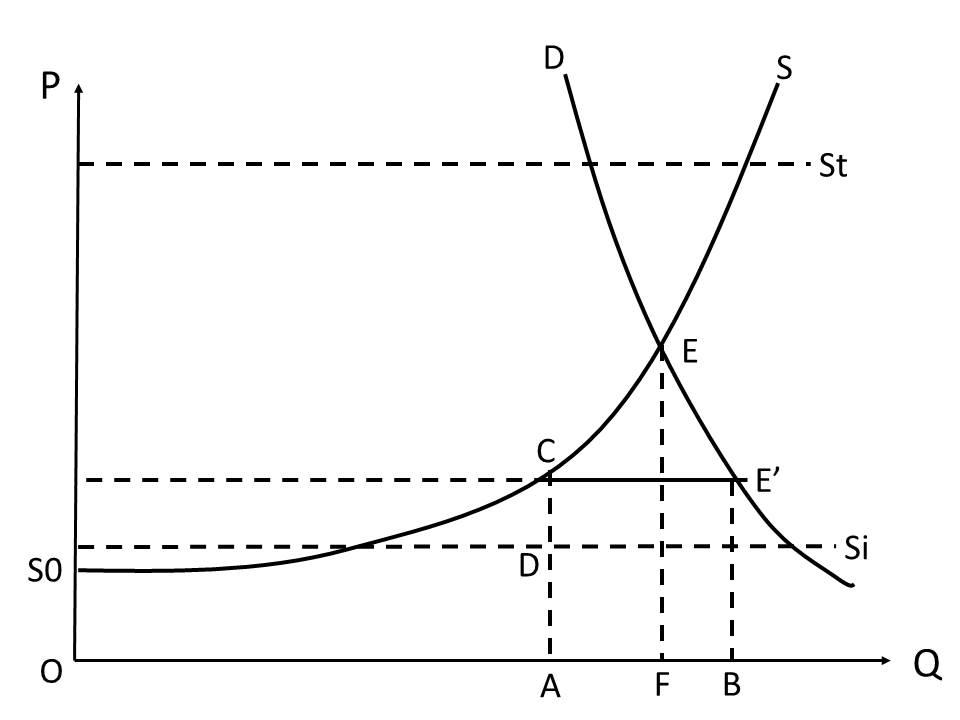 In the case of butter or rice, the supply curve of zero-tariff imports is represented by Si and that of imports subject to the import-prohibitive tariff is represented by St. Because St is above the domestic equilibrium price, imports subject to the tariff are non-existent. The supply curve of domestic and imported butter or rice combined is indicated by S0CE'. AB (= CE') denotes imports within the import quota, while the amount corresponding to CD represents the rent the Japanese government collects through bidding. In this case, the price will fall and domestic supply will decrease from OF to OA.

An obvious loser in the latest free trade negotiations is the EU. Nothing is gained for the EU cheese producers. This is probably because EU negotiators were mostly legal experts who are incapable of economic analysis. Ignorance of economics turned out to benefit Japanese negotiators, who unwittingly won the negotiations. Another loser is Japanese consumers. The Japan-EU FTA did not live up to their expectations.

(This article was translated from the Japanese transcript of Dr. Yamashita's column.)