Rather than being abolished, the Gentan System was strengthened.－We need to abolish the gentan policy even if we are not pushed by the United States to do so.－

The article was originally posted on Webronza on December 19, 2016

The December 13 edition of the Nihon Keizai Shimbun published an editorial headlined "Do Not Reduce the Abolition of the Gentan Policy to an Empty Slogan." The editorial's claim was that it is ludicrous that the government is attempting to implement a policy aimed at revamping the gentan (rice acreage reduction) policy despite its plan to abolish it starting in fiscal 2018. I have called for the abolition of the gentan policy for many years and have no objection to that idea. The issue I want to address here is the editorial's premise that the Japanese government will abolish the gentan policy.

The abolition of the Gentan System was a false report

In 2013, the government reviewed its gentan (production adjustment) program. This decision was based on an agreement that was reached by lawmakers affiliated with farm organizations (norinzoku) for the Liberal Democratic Party (LDP), which had regained power, and the Ministry of Agriculture, Forestry and Fisheries. However, this news made the front page of a particular newspaper and the headline read "Gentan Policy to be Abolished" without inquiring of the norinzoku or the Ministry of Agriculture, Forestry and Fisheries. Several other major newspapers followed suit.

Prime Minister Shinzo Abe and his official residence barely touched on this policy decision, which was reached between the norinzoku for the LDP and the Ministry of Agriculture, Forestry and Fisheries. Yet Abe later declared that he had abolished the gentan policy. He said proudly that this was a feat that no one was able to achieve over the past 40 years. He made this claim not only in his administrative policy speech to the Diet, but also at the World Economic Forum in Davos, Switzerland.

The Japan Agri News shined a spotlight on the responses to questions in the Diet given by Yoshimasa Hayashi, the Minister of Agriculture, Forestry and Fisheries (at the time), who believed that the gentan (production adjustment) was necessary. When I spoke at the Japan National Press Club around that time, the emcee introduced me in a curious way. Here is what he said: "Interestingly, the review of the gentan policy is the only issue that the Ministry of Agriculture, Forestry and Fisheries, the Japan Agricultural Cooperatives, and Mr. Yamashita agree on."

During a meeting of the Lower House Budget Committee held in February 2014, Prime Minister Abe was asked about the inconsistencies concerning the statements made by the LDP's top officials in charge of agriculture and forestry as well as the Ministry of Agriculture, Forestry and Fisheries who stressed the need for the gentan policy, and his own remarks. Prime Minister Abe's response was that he merely made his remark so that it would be clear to the general public, and he retracted his remark that the gentan policy had been abolished. I thought that this remark would surely make headlines because Prime Minister Abe had admitted that he had made a false statement to the public in a Diet session. However, that did not happen.

In 2013, in the midst of news reports that the gentan policy would be abolished, prominent economists and former government bureaucrats asked me the following: "Is the report really true? The gentan policy is designed to ensure the high price of rice and is central to our post-war agricultural policies, and I don't believe that it can be abolished that easily. I can't believe that our agricultural policy makers, who do not even approve the acquisition of farmland by business corporations, would willingly make such a proposal."

This is what I told them:

"You're absolutely right. The media reports are completely false. The abolishment of the food control system was a result of the GATT Uruguay Round. Making drastic changes to agricultural policies such as the abolition of the gentan policy or policies for ensuring the high price of rice would require substantial environmental changes. Such changes are not taking place right now. It is stipulated in the Trans-Pacific Strategic Economic Partnership Agreement (TPP) that rice tariffs will not be removed. Therefore, there is no need to reduce the price of rice by abolishing the gentan policy. Far from abolishing the gentan policy, the government will strengthen it. Those reports are false. They were reported by those who do not understand the essence of the gentan policy." They nodded to my response.

The gentan policy is a policy aimed at keeping rice prices high by reducing the supply of rice through the provision of subsidies to farm households. It is the most important policy for the agricultural policy triangle, which consists of the Japan Agricultural Cooperatives, norinzoku, and the Ministry of Agriculture, Forestry and Fisheries.

What then transpired when the gentan policy was reviewed in 2013?

It is only the production targets for rice acreage reduction that will be abolished. Far from being abolished, the gentan policy will be strengthened. In fact, in 2007, during Abe's first tenure as prime minister, he abolished the production targets, just as they were in this review, and immediately repealed them after the price of rice dropped. Prime Minister Abe himself had implemented the policy five years ago and repealed it. This is not a feat that no one has been able to achieve over the past 40 years.

Figure: Revenues from Rice as a Staple Food and Rice as Animal Feed 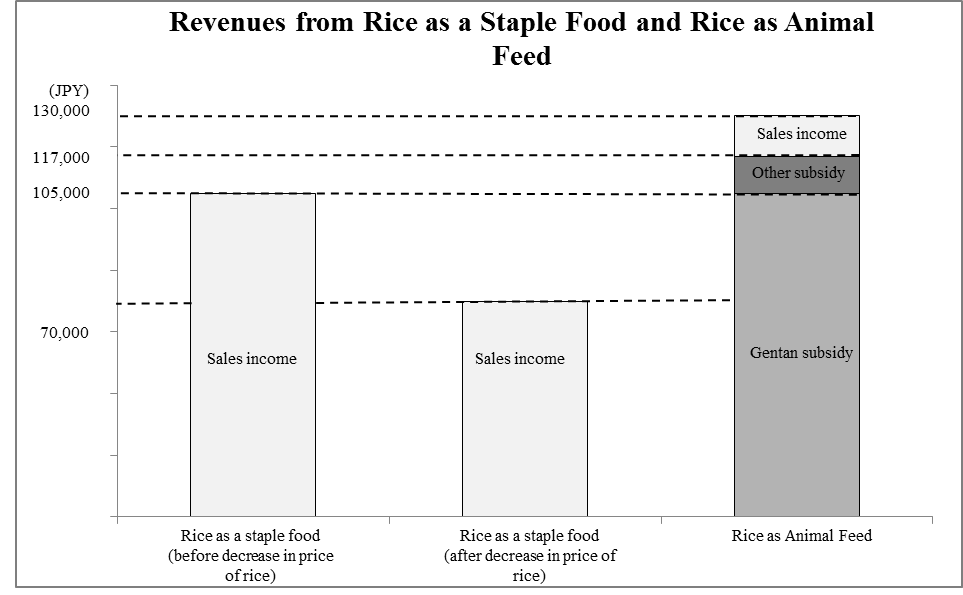 The review of the gentan policy had a profound impact. In 2014 the price of rice as a staple food fell to 70,000 JPY per 10 acres. Therefore, growing rice as animal feed was much more profitable, as it resulted in a revenue of 130,000 JPY, including 105,000 yen in gentan subsidies.

The government will continue this subsidy system. Under the Basic Plan for Food, Agriculture and Rural Areas, which was approved in a Cabinet meeting, the production target for rice as animal feed for the year 2025 will be 1.1 million tons. Promoting efforts to grow rice as animal feed is clearly highlighted in the Agricultural Competitiveness Enhancement Program, which was adopted along with the recent agricultural reforms?

Trump's America will file a complaint with the WTO

This, of course, entails an enormous financial burden. Nearly 100 billion yen will be collected through taxes in 2016 alone. If the goals stipulated in the basic plan are reached, 200 billion yen in taxes will be spent on animal feed. While the Ministry of Finance Japan asserts that this needs to be reassessed, the ministry currently does not have the power to stand up to the LDP.

Policies, ordinarily, are designed to provide the public with goods or services at an affordable price in exchange for a financial burden, much like medical policies. There is no other policy that raises the price of rice by collecting 400 billion yen in taxes and requiring the consumer to make an additional payment of 600 billion yen, which is what the gentan system entails. This means that every citizen, ranging from babies to the elderly, is required to pay 10,000 yen annually.

We need to abolish the gentan policy even if we are not pushed by the United States to do so.

(This article was translated from the Japanese transcript of Dr. Yamashita's column in "Webronza" on December 19, 2016.)