The article was originally published on Kinyu-zaisei Business on August 18,2016

In the past few years, there has been a shortage of butter due to controls on the production of raw milk related to the reduction in demand for powdered skim milk after a case of mass food poisoning in the Snow Brand Milk Products Company (now the Megmilk Snow Brand Company). This has not been regarded as important, even by people involved in agriculture, but the tariff on whey, an ingredient similar to powdered skim milk, is about to be considerably reduced and eventually abolished under the TPP negotiations. If powdered skim milk production is reduced due to an increase in whey imports, shortages of butter will be more serious. To avoid this, not only a reform of policy for dairy farming but a radical reform of agricultural policy as a whole is needed.

The true reasons behind the shortage of butter

There has been a shortage of butter since 2014. An agricultural economist said that one factor behind the shortage of butter is the abandonment of farming caused by financial difficulties due to the static raw milk price. The economist suggests that Japan should strengthen the protection of dairy farming.

Additionally, it is not a problem of management which is causing the abandonment of dairy farming. Management has been in a good condition due to a rise in the milk price in 2009; calf prices have also risen considerably. The annual average income of a dairy farmer in the fiscal year of 2014 was 9,740,000 yen, which was more than double a rice farmers' annual average income of 4,120,000 yen.

There were some in the press who believed the economist's analysis, however many gave the following opinion.

However, they did not explain the following points.

Then what is the reason for the shortage of butter in Japan?

Graph1 : The shift in the consumption of butter and powdered skim milk 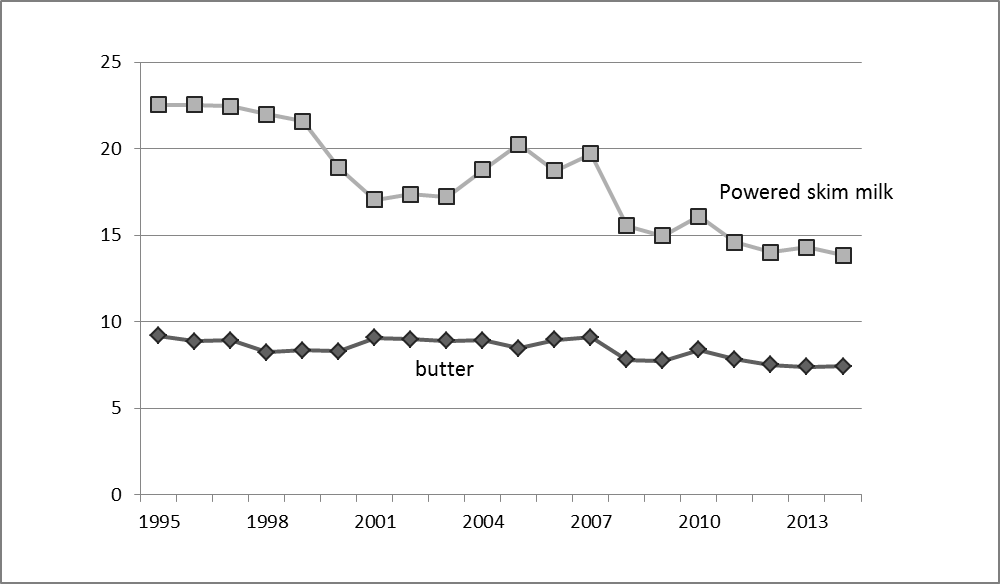 Graph2 : Milk can be produced from butter and skim milk

If raw milk is produced to meet the demand for butter, the balance between demand and supply of butter is satisfied but there will be a surplus of powered skim milk. Then low fat milk, which is also a kind of recombined milk, is produced from the left over powdered skim milk and the price of drinking milk falls. As a result, dairy producers will be requested to lower the price of raw milk. In order to avoid this, raw milk has to be produced to match the demand for powdered skim milk. As a result butter is always in shortage.

Graph3 : amount of ALIC import (convert into the amount as raw milk) 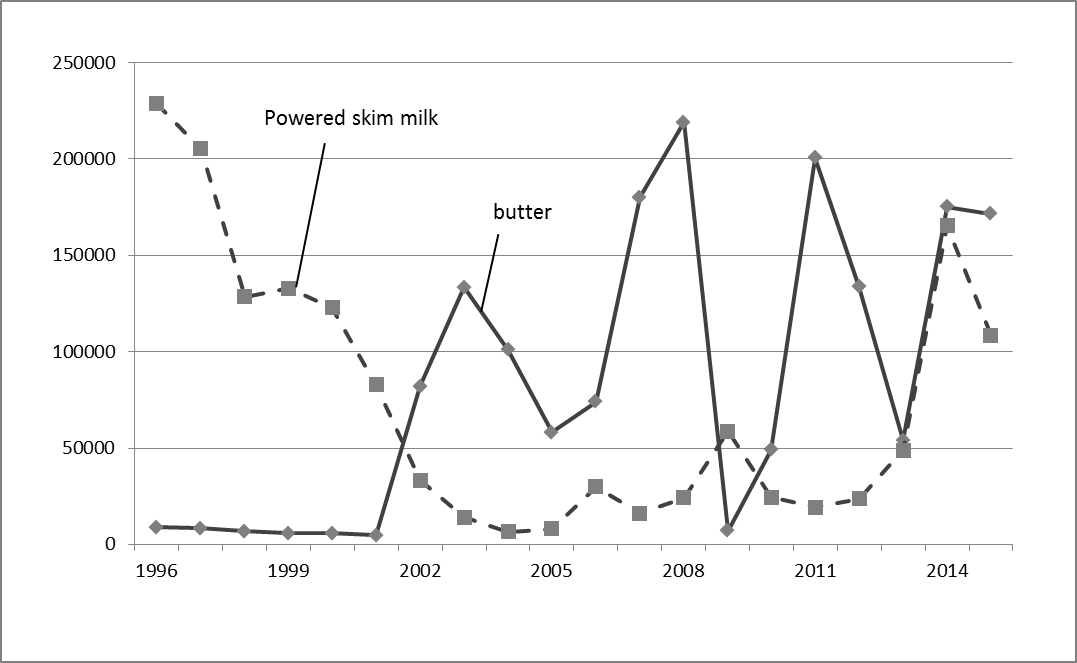 
So since 2013, why has not enough raw milk been imported? Regarding butter, imports by private companies are effectively forbidden due to high tariffs and a Japanese national organization, ALIC (Agriculture & Livestock Industries Corporation) who control the low tariff import quota exclusively under the guidance of the Ministry of Agriculture. If the Ministry of Agriculture imports too much butter and eases domestic the supply and demand for milk and dairy products, it affects negotiations between dairy farmers and dairy companies over the price of milk. In cases where the dairy farmers are weakened in negotiations, the Ministry of Agriculture will be blamed. Aware of this, the organization does not have positive attitude towards importing butter.

Increase in imports of whey increased the shortage of butter

Japanese dairy products would experience some negative effects as a result of the TPP negotiations. Japan has to abolish the tariff on natural cheese such as cheddar and Gouda, which will become an ingredient of processed cheese sixteen years after the TPP starts. In return, Japan could maintain tariffs on butter and powdered skim milk under the condition that Japan has to establish import quotas of 70 thousand tons of raw milk for each product. As Graph 2 shows, butter and powdered skim milk are dairy products which need special attention.

However there is a dairy product called whey whose composition is similar to powdered skim milk. This is the liquid which gathers on top of yoghurt when it is left to sit. This is a by-product of cheese, and the US, who produce a large amount of cheese, had a big interest in the expansion of whey exports. The tariff on whey will be abolished in 21 years after TPP goes into effect, and will be reduced to considerably lower one in the first year of its implementation than the previous level. In addition even if the safeguard is taken, the applicable tariff rate is low and it will not help Japan stop the increase in whey imports. If imports of whey (which compete with powdered skim milk) increase, Japan cannot help but reduce powdered skim milk production. In keeping with this, raw milk production also has to be reduced. As a result, butter production will also be reduced and shortages of butter will increase.

In the beginning, the Ministry of Agriculture, Forestry and Fisheries explained that this subsidy was only a temporary policy, for about 5 years. However, it has been more than 40 years. 1.36 million tons of raw milk for fresh cream is produced and is almost at the same level as the production of raw milk for processed products such as butter and powdered skim milk (1.54 million tons). Under the deficiency payment law, the areas where more than the half of raw milk production is for processed production qualify for the subsidy. However, production of raw milk for fresh cream has been increasing in Hokkaido and so an end to the subsidy in this area should be considered. This means that this deficiency payment law has already achieved its aims.

The shortage of butter means that the deficiency payment law has been achieving its original target. If the raw milk production for processed production in Hokkaido drops, the subsidy paid by government declines. Moreover high tariffs on dairy products such as butter will not be needed nor will exclusive importing systems for dairy products by ALIC.

However, the deficiency payment system will not be abolished but strengthened as a countermeasure against the TPP. Raw milk for fresh cream is going to be included as a target for protection by subsidy. From that perspective, Hokkaido becomes a subsidised area once again.

New Zealand is the biggest country in terms of dairy product exports but cannot export to China because of distance. Japan however is close to Korea, Taiwan, and China. Raw milk can be sent from Hokkaido to the Kanto area, so Japan should be able to export to China and nearby countries by sea.

In China, both consumption and imports of milk have been increasing. Moreover the value placed on Japanese milk and dairy products is high in China; a lot of Chinese travellers purchase powdered milk for babies in Japan.

Although New Zealand cannot export to China, Japan is close to China. New Zealand is superior in the production of basic dairy products such as butter and powdered skim milk but Japanese dairy producers have a high level of food-processing skill such as in powdered milk for babies. So Japan could produce low cost raw milk using the farming techniques of New Zealand in Hokkaido and export to China. Japanese dairy makers produce a high level of dairy products and foods using butter and powdered skim milk imported from New Zealand, could be exported to China. In this way, Japan would be able to have win-win relationship with New Zealand.

How should Japan do this? Regarding the difference in milk price depending on use, setting a low price for raw milk for processed dairy production and a high price for drinking milk has caused a drop in demand for drinking milk. If Japan is to target Asian markets it not only has to prioritise the quality of production but also price competitiveness.

Under the present situation, where the international competitiveness of Japanese butter and powdered skim milk has not been improving, Japan should shift to a single milk price system as Australia did after reforms in 2000. In this way, Japan should reduce the production of raw milk for processed production and target the export of drinking milk to Asian markets. Due to the seasonal imbalance between demand and supply, butter and powdered skim milk have been produced in winter when there is a surplus of milk, with a return to producing milk in summer in Japan. This system is called surplus milk management and factories which operate only in winter have been necessary. However surplus milk management would not be needed if Japan were to target Asian markets. Japan could just export the surplus milk.

If the price of drinking milk drops, the popularity of different drinks, of which green tea is currently the highest, will change and drinking milk demand will increase. In such a scenario, ALIC can be abolished, tariffs on dairy products can be gradually cut and eventually abolished. In cases where there is a shortage of butter and the price rises, imports will be triggered automatically and the price will drop.

Japan should not have promoted livestock farming which relies on imported feed and does not contribute to international food security, but instead should have promoted livestock farming using domestic crops or resources. How about drafting an agricultural policy from the view of food security, not for protecting Japanese agriculture? Food security can be achieved in cases where agricultural resources are maintained. If so, the Japanese government just needs to pay subsidies only to guarantee farmland, instead of creating agricultural policy for individual products. The Japanese government should abolish both subsidies for reduction of rice acreage and the subsidy for dairy farming, and should introduce single direct payments for each area of farmland. The government should not interfere in what is produced in each area and should trust in farmers' originality and ingenuity. Such a single direct payment by the government is the ideal way to protect agriculture. The EU has achieved this after a transition period of 20 years. Except for Japan, countries who participated in the TPP, including developing countries such as Vietnam and Malaysia, had achieved 99% to 100% of liberalization of trade (abolition of tariffs). In the GATT and the WTO, there have been a series of round table negotiations for liberalization of trade. Also, renegotiation of the TPP is planned. If the tariff on Japanese agricultural products is abolished in the next TPP negotiations, the acreage-reduction policy will be abolished and Japanese national trade enterprises for rice, wheat and dairy products will fall into disuse. Japanese people will be able to consume food and agricultural products at a low price and shortages of butter will not occur.

(This article was translated from the Japanese transcript of Dr. Yamashita's column in "Kinyu-zaisei Business" on August 18,2016.)