The TPP negotiations are nearing an agreement. The US Congress, where the pro-free trade Republicans have a majority, may pass the TPA bill that gives the government authority in trade negotiations as early as this spring. The US government will then be prepared to conclude the negotiations and sign the agreement at any time.

The talks between Japan and the US over agricultural products are also approaching an agreement. Japan agreed to significantly reduce the tariffs on beef and pork. The American pork organisation, which was strongly demanding tariff abolition, commended this concession, and the speculation that the Japan-US negotiations will conclude has spread in Washington.

As for rice, it is reported that Japan is examining the establishment of a special 50 thousand tonne import quota for American rice in addition to the current low-tariff import quota of 770 thousand tonnes per year - what is called the minimum access quota - in return for maintaining tariffs.

The problem is rice. Japan is negotiating to increase the low-tariff import quota in order to maintain the high tariffs. Until now, the same amount of rice that had been imported through the minimum access system has been used as livestock feed etc to ensure that minimum access rice did not affect domestic demand and supply. Since [the government] has been buying rice for a high price and selling it for a cheap price, they have wasted about 300 billion yen of tax money up to this point. The additional import quota will lead to even more wasted tax money.

However, is maintaining tariffs our only option? The tariff on rice is said to be 778%, but in actuality the only tariff that exists is the specific duty of 341 yen/kg. The 778% is derived from the comparison of this tariff with cheap Thai rice.

Given that the wholesale price of domestic rice is 200 yen, the 341 yen tariff is excessive; imported rice would not be able to compete with domestic rice even if it were imported for free. If Californian rice, which is similar to Japanese rice in terms of quality, is imported for 150 yen, then a 50-yen tariff is sufficient to protect high-quality domestic rice. The tariff can be reduced by 85% from 341 yen to 50 yen. Even if the tariff is not reduced by that much, reducing it by 141 yen should not cause any problems, given that the 141 yen difference between 341 yen [the current tariff] and 200 yen [the wholesale price] is unnecessary even if foreign rice were imported for 0 yen.

If the government is going to bear a financial burden, they should rather abolish tariffs, abolish acreage reduction and reduce the price of rice to provide rice to consumers at a cheap price while providing direct payments from the budget to affected business farmers.

In this scenario the 400 billion yen acreage reduction subsidy will be abolished, so there will be plenty of funds to work with. If the price of rice drops, high-cost, small-scale, part-time farmers will stop farming and lease their farmland to business farmers, so scale expansion will make progress, costs will fall and the consumers will benefit. This is the ideal policy.

However, for the JA this scenario is a grave matter as it means the disappearance of part-time farmers who supported their development.

The JA was born as a result of renovating the pre-war control group, which conducted all businesses relating to agriculture and rural areas in the past, for the purpose of collecting rice for the government during the post-war food shortage. The JA became the only all-purpose corporation in Japan that can deal in banking, life insurance and general insurance.

Furthermore, even though they are a craft group for farmers, they were allowed to adopt the "associate membership" system, where any local residents can use the JA's businesses. The JA, which was established on the foundation of a control group, became a top-down organisation where central organisations gave instructions and orders to local agricultural cooperatives. Local agricultural cooperatives are not being controlled by their members, but instead are being controlled by the JA's federations at the national and prefectural levels.

The JA, which was formed by farmers who wanted to purchase agricultural production materials at a cheap price, used their exemption from the Anti-Monopoly Law to force farmers to pay double the price of that in the US for material such as fertilisers and agricultural chemicals and machinery. A high tariff is required to maintain the prices that are higher than the international prices.

In the 1960s the JA, which wanted to maintain the number of rice farming households, opposed structural reform that involved reducing the number of farm households for the purpose of achieving scale expansion and engaged in a political campaign for raising the price of rice. The high price of rice meant that high-cost, small-scale, part-time farmers remained in farming. Since these farmers did not lease out their farmland, farmland was not consolidated to the hands of business farmers and scale expansion did not make progress. The increase in the price of rice ate away at agriculture as it caused the retention of part-time farmers, reduction in rice consumption and acreage reduction following excess rice production. While 70% of farmers are rice farmers, they only produce 20% of agricultural production - this point to the inefficiency of the rice industry.

Part-time farmers who are trying to leave farming deposited not only their income earned from their jobs other than farming, but also the several trillion yen of annual profit made from the sale of farmland for purposes such as residential use other than agriculture with the JA Bank. Thus the JA Bank's total amount of savings increased to approximately 94 trillion yen, making them one of the second largest megabanks in Japan. 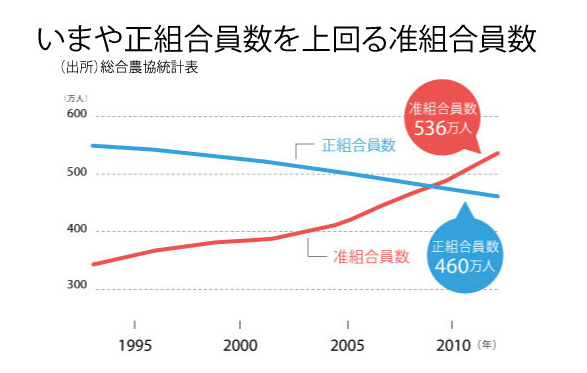 While the Abe administration advocated eliminating provisions relating to Zenchū, which plays the central role in the JA's political activities, and prefectural central unions from the Agricultural Cooperative Law, Zenchū argued that their authority to audit should be prescribed in the Agricultural Cooperative Law. This was because auditing was an important means to control local agricultural cooperatives. Abolishing mandatory audits by Zenchū, turning Zen-noh into a stock company and applying the Anti-Monopoly Law can lead to reducing the price of agricultural materials and improving farmers' income. Consumers can also benefit from cheap prices.

In the end, the administration and Zenchū agreed to:
-Eliminate provisions relating to Zenchū from the Agricultural Cooperatives Law and turn Zenchū into a general incorporated association;
-Allow local agricultural cooperatives to choose between audits by an auditing corporation separated from Zenchū and audits by other auditing corporations;
-Continue to position the prefectural Chūōkais based on the Agricultural Cooperatives Law;
-Allow Zen-noh to judge whether or not to turn into a stock company;
-Postpone regulations on the use of businesses by associate members.

By making Zenchū's audits voluntary, the national organisation's control will weaken to a certain degree. However, Zenchū's political power will not be eliminated. Zenchū collects 8 billion yen and prefectural central unions collect 30 billion yen in 2013 in contributions from cooperatives in the federated organisation called keitō nōkyō.

Even though agricultural cooperatives centred on Zen-noh form an enormous business entity that has an 80% share of fertiliser sales, the Anti-Monopoly Law does not apply to them because they are a cooperative. They pay lower corporate taxes and are also exempt from real estate taxes. Given these benefits, Zen-noh etc will not convert to a stock company.

The proposal to restrict the use of services by associate members to half of that by regular members was merely for show. Without associate members local agricultural cooperatives will lose loan customers. They probably did not care what happened to Zenchū's audits as long as associate members could be maintained.

Reforms regarding essential issues such as the one vote per member system, wherein the opinion of the large number of small-scale farmers are reflected in the JA's decision making because their votes have the same weight as business farmers' votes, and the conversion of JA to local cooperatives have not even been proposed yet. JA reform must not end here.

There have been disputes amongst MAFF, JA and politicians backed by farmers who were called nōrin zoku in the past, but they never came to the surface. However, this time the JA fully confronted the MAFF, as can be seen in their intense arguments regarding the changes in the MAFF's opinion. Even though JA reform might not have achieved the expected results, the fact that a large rift has been created has considerable significance.

(This article was translated from the Japanese transcript of Mr. Yamashita's column on Wedge Infinity on March 20, 2015. It was translated by Professor Aurelia George Mulgan, The University of New South Wales, Canberra.)