Having earned his Ph.D. in politics and public policy with a specialization in international relations and security studies at Princeton University, Dr Joshua W. Walker worked for the US Embassy in Ankara and the State Department to consider the US policy in the Middle East. He is one of the rising experts of younger age in Turkish politics and diplomacy. In addition to his work with GMF, Dr Walker is the director of Global Programs at APCO Worldwide in the Office of the CEO advising policy makers, business persons and academics of foreign policy, international affairs, and public-private partnerships. He speaks Turkish and Japanese fluently as he spent his childhood in Japan.


Summary of his speech

Dr Walker presented comprehensive analysis on domestic and diplomatic policies of Turkey, and explained the reasons why Turkey needs to handle the relationship with the US sensitively. After Recep Tayyip Erdogan won the presidential election in August 2014, the first direct presidential election in the Turkish history, the country is in the process of transition from the symbolic president under the parliamentary cabinet system to the presidential government with executive power. As a moderate Islamic state, Turkey has based its foreign policy on multitrack diplomacy including cooperation with the EU and the US as well as participation in the multinational mechanisms. On the other hand, the recent crisis in Syria and the rise of the Islamic State in Iraq, which have caused heightened sense of insecurity and a massive inflow of refugees, require Turkey to take both hard-line and flexible policy measures while upholding the anti-terrorism strategy. Regarding the relation with the US, the Turkish government has had some success in coordinating the policy toward Syria with the Obama administration and in improving the relation with Israel while it has persistently been facing the domestic anti-American sentiment. Dr Walker pointed out that the US-Turkey relationship has not sufficiently deepened for reasons of the abovementioned complex political and social situations in Turkey. 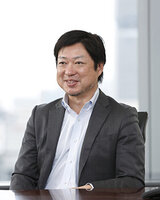