The case of Denmark

Denmark was fully dependent on fossil fuels when the two oil crises hit in the 1970s. The deep economic crisis led to a target of energy security through self-sufficiency and independence from the Middle East, substituting oil for coal in the power plants and taking advantage of domestic oil and gas supplies in the North Sea. However, the domestic oil and gas was challenging to extract and limited in quantity. Therefore, the strategy was to increase energy efficiency and energy savings, while also exploring alternative renewable energy sources.

In the late 2000s, the Danish attention to climate change rose and intensified efforts to exploit renewable energy. Combined with increasing energy efficiency and energy savings, this has resulted in a stable energy consumption and lower carbon emissions even though GDP has grown substantially. The CO2e emissions were reduced by 40% from 1990 to 2019, mainly due to district heating and electricity generation which earlier accounted for 30-40% of CO2e emissions but only 11% in 2019. 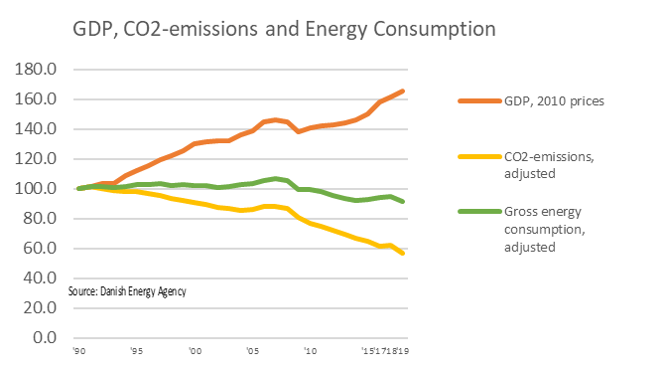 Renewable energy accounted for 82% of the electricity production in 2019 (wind, solar, biomass, and biogas). When focusing only on domestic supply of electricity, renewable energy accounted for 67.5% which includes a wind power share of 46.8%. Today, the Danish company Vestas is the world’s leading manufacturer of wind turbines while Ørsted is the largest offshore wind energy developer. As regards the total Danish energy consumption, coal is almost phased out and the share of renewable energy increased from 11% in 2000 to 38% in 2019. However, there is still far to go as oil and natural gas continues to be important energy sources with shares of 37.6% and 15.1%, respectively.

4 key features of Danish climate and energy policies over the past 4 decades are highlighted:

The key to reaching the 70% target is electrification based on renewable energy, and adequate and timely development of the energy infrastructure, underpinning a green transition in all of society. The Danish energy sector has outlined that the 2030 climate target is reachable and estimated that investments of 32 billion DKK annually is required towards and including 2030. The Danish financial sector has announced that it will invest 350 billion DKK in the green transition up to 2030. The main challenge will be whether the regulatory framework is in place in due time to allow for the long-term planning required for the large investments. The 2030 target is challenging but further measures are underway, and the systematic approach of the Climate Act applies constant pressure on the Government-in-office to act with due diligence.