【Aging, safety net and fiscal crisis in Japan】No.296: Increase in the number of elderly people returning their driver’s licenses

In this column series, Yukihiro Matsuyama, Research Director at CIGS introduces the latest information about aging, safety net and fiscal crisis in Japan with data of international comparison.

As shown in Figure 1, the number of driver’s license holders, which had been increasing until 2018, decreased for the first time in 2019. The number of license returnees surged from 421,190 in 2018 to 601,022 in 2019 (Figure 2). One factor contributing to this was the tragic traffic accident that occurred in Tokyo in April 2019. A man, who was 88 years old at the time of the accident, drove on a general road at a speed of over 100 km/h, seriously injuring nine people and killing a mother and her young daughter on a bicycle. Although it has been scientifically proven that the cause was not a car breakdown, he continued to insist to the court that the brakes were out of order. It was also revealed that his doctor and family members had recommended he return his license because of weakened leg strength and suspected dementia, but he refused. Ironically, this rather unscientific person was the president of the National Institute of Advanced Industrial Science and Technology. 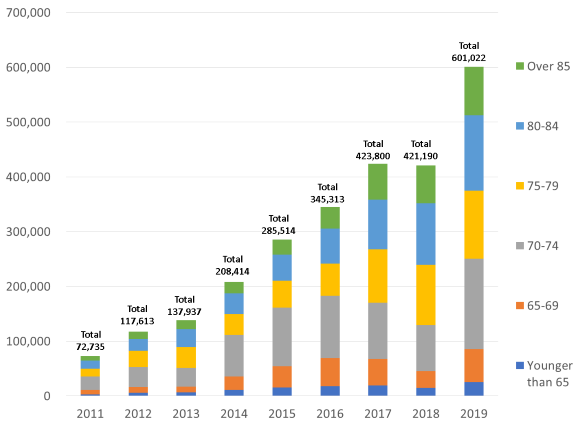