In this column series, Yukihiro Matsuyama, Research Director at CIGS introduces the latest information about aging, safety net and fiscal crisis in Japan with data of international comparison.

On October 9, 2020, the Ministry of Health, Labour and Welfare published a revised version of the human papillomavirus (HPV) vaccine manual for the public. According to the manual, about 11,000 Japanese women develop cervical cancer due to HPV annually, of which an average of 2,800 pass away. The government approved the HPV vaccine in 2009, although it began being used in Western countries in 2006. In 2013, it was certified as one of the routine vaccines based on the 2013 Vaccination Law and became available to women of a suitable age for free. Reflecting this government vaccination recommendation, the HPV vaccination rate in 2013 was 44.0% (Figure 1). However, the government removed the HPV vaccine from the routine vaccination list because serious allergies and nervous system diseases were confirmed in about 5 out of each group 10,000 women that were vaccinated.

As shown in Figure 2, the HPV vaccination rate in Japan in 2018 was 3.2%, which was far lower than that in Canada (83%), the United Kingdom (82%), and Australia (80%). In principle, it is necessary to receive the HPV vaccine three times during a certain period of time, but those who have confirmed side effects from the first or second vaccination should avoid the third vaccination. Furthermore, 3.2% comprise 1.3% with one dose, 1.1% with two doses, and 0.8% with three doses. This means that only 0.8% of the target female population was able to complete the entire course of three vaccinations. Public distrust of vaccine safety is deep-rooted, and the influenza vaccination rate is only approximately 50%. The government is currently considering inoculating as many people as possible free of charge once the COVID-19 vaccine is developed. However, it is doubtful that the public will support a vaccine if its safety has not been fully confirmed. 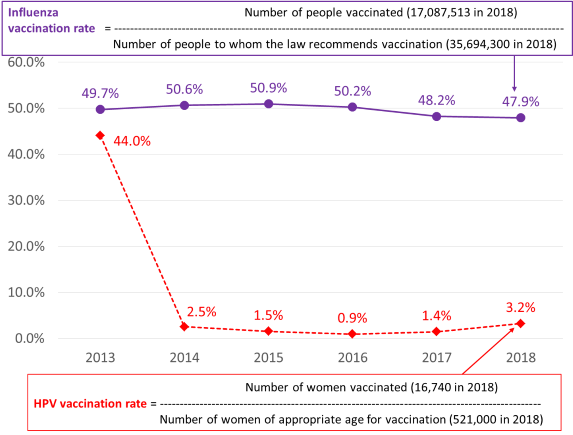 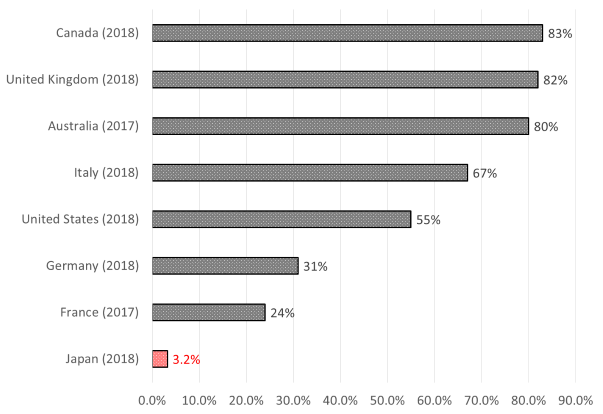