The Reasons Trump Has Not Pursued the Liberalization of Japan's Rice Market - It's all about the presidential election, as concessions over rice are of absolutely no concern to Trump.

The article was originally posted on RONZA on September 19, 2019

Rice was supposed to be at the center of Japan-US trade issues, and so the question is: Why?

There is sure to be no shortage of people in Japan who are absolutely bewildered by such a state of affairs.

In 1986 the Rice Millers' Association (RMA), an organization of rice collectors in the United States, brought a case to USTR seeking that the import bans on rice by Japan must be brought under the purvey of Section 301 of the US Trade Act, causing an turmoil among the Japanese government as if it had stirred up a hornet's nest. The reason for this was because rice was sacrosanct and had been wholly off limits in Japanese trade negotiations.

Even as the United States pursued the liberalization of beef and oranges, it had never occurred to the Japanese government that the rice that most farmers grew would be brought up for discussions in the negotiations. The agricultural vote has traditionally supported Japan's conservative ruling party, and the Japanese government was under the impression that the United States was fully aware of the political importance of rice to Japan.

Instead of promising to engage in consultations over the rice issue during the GATT Uruguay Round negotiations, the Japanese government sought leniency from the US government in order to prevent this issue from being subjected to the USTR scrutiny. This is because if Section 301 of the US Trade Act were to be invoked, then retaliatory measures could presumably be taken against automobiles.

As part of these same negotiations, the Japanese government negotiated with the United States in order to exempt rice from the tariffication (by abolishing non-tariff barriers such as quantitative restrictions on imports and converting them into ordinary custom duties). I myself was a member of the Japanese negotiating team. As a result of this, Japan won a deferment on tariffication by paying compensation for increase of the amount of its duty-free import quota than the amount introduced in the case of tariffication in the form of minimum access. However, the increases in this minimum access became unbearable, and Japan transitioned to tariffication with respect to rice in 1999.

Even in the TPP negotiations, the Japanese government resisted against cuts in tariffs on rice as a matter of the utmost importance. As a result, in return for maintaining tariffs it decided to set the forementioned import quota of 70,000 tons for the United States.

The above offers an overview of the sequence of events regarding Japan-US trade negotiations as regards rice to date. Talks over the rice issue have not gone smoothly in any of these negotiations.

Yet looking back over the past negotiations, the rice issue in this Japan-US trade talks has been exceptionally concluded without any serious discussions or battles, has it not?

It's all about Trump's reelection

The following most likely describe the surface-level circumstances that manifested themselves in the negotiations.

For Trump, the utmost concern is winning next year's presidential election. To do so, he must secure the agricultural vote of the Midwestern and corn belt regions.

However, US beef and pork were placed in an unfavorable position in the Japanese market through the enactment of TPP 11. This dealt a further blow to the farmers in the US Midwest who grow the corn and soybeans that feed cattle and pigs. Therefore, the US government is negotiating with the Japanese government in order to lower tariffs to be on par with those of competing countries such as Canada and Australia, and an agreement reflecting the results of this must be enacted sometime this year.

However, the US Congress has stated that it will not approve of any agreement that does not cover a broad range of not only tariffs on goods, but also trade on services, investments, intellectual property rights, and more. Reaching such a comprehensive agreement would not only involve lengthy negotiations with the Japanese government, but also take time before congressional approval could be reached. This would not even be close to arriving in time for next year's presidential election.

In actuality, more than ten months have passed since the signing of the agreement for the USMCA, which revised the North American Free Trade Agreement (NAFTA). However, as the Democratic Party has continued to raise claims regarding labor and environmental issues in relation to trade, there are as of yet still no prospects for it to receive congressional approval.

But there is a loophole whereby an agreement that only abolished tariffs less than 5% could go into effect without congressional approval. The Trump administration has taken advantage of this.

For this reason, the 25% tariffs on pickup trucks that were agreed to be eliminated through the TPP are out of bounds. However, if only the United States is offering concessions at or below those of the TPP while Japan is offering concessions on par with it, then the Japanese government will lose face and the Japanese Diet will not approve of this. As a result, tariffs will not be lowered on beef and pork produced in the United States.

Therefore, when it comes to rice, the decision was made not to seek concessions on par with those of the TPP from Japan.

Why is rice no longer important?

Yet there is one assumption behind such an outcome. This is the fact that rice is not important to the Trump administration. 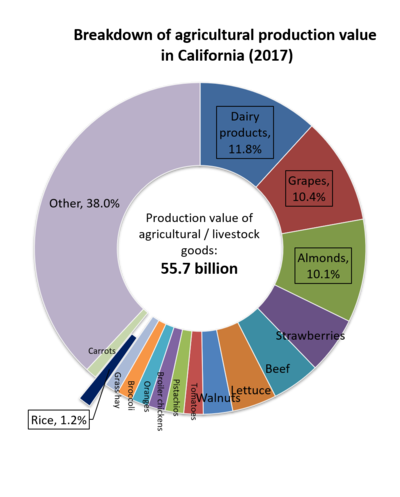 Japan's agricultural society associates the word "California" with rice. The reason for this is because they have been annoyed and attacked by the demanding and disastrous negotiations held to date. Yet if you were to show the Japan's agricultural industry members the following graph, it would trigger astonishment in them across the board that would seemingly rivet them as if they had seen a ghost. This is because within California's agricultural production rice is a minor crop with a mere 1% share. Yet even so, this share is decreasing year by year. 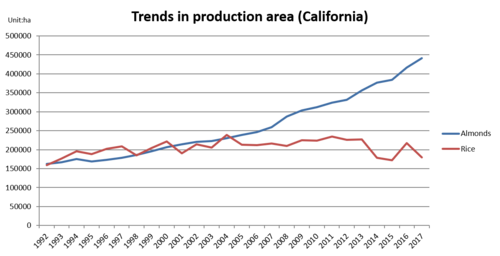 Items with a market share of more than 10% include dairy products (dairy farming), grapes (for wine production), as well as almonds. It is claimed that California almonds account for 80% of the global volume of trade.

Vast quantities of water are needed in order to produce these almonds. With water becoming rarer and rarer in the state, as California strives to expand production of almonds this has necessitated a contraction of its production of rice, which similarly requires vast quantities of water. Rice production in California will continue to decline. Arkansas is unable to produce medium- and short-grain varieties of rice due to unfavorable climate and natural conditions (producing short-grain rice is considerably difficult even in California).

Trump can't win in California no matter what

But that's not the only issue. Given the shrinking price difference between Japanese rice and US rice, the share of successful bids for the 100,000 tons of minimum access (MA) rice is falling. (the figure below can be read as indicating that as the price difference between Japanese rice and US rice shrinks, the fill-rate also falls). Even if an import quota of 100,000 tons cannot be filled, then newly setting a quota of 70,000 tons would prove to be out of reach of California's rice industry. 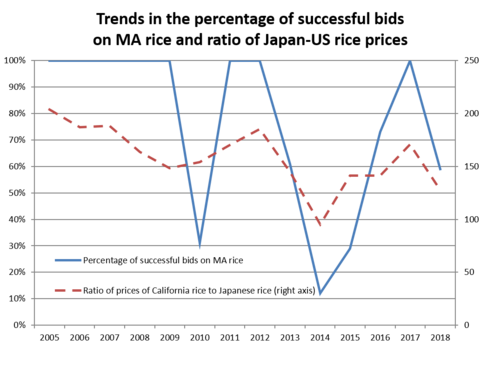 In a political sense, in the presidential election California is a blue state that the Democratic Party is certain to win. Trump has absolutely no prospects of a victory there. So even if Trump goes to bat for California rice production, it will not help him win reelection.

The Trump administration does not make concessions not only on trucks, but also on the 2.5% automobile tariffs and the like that were promised to be abolished under the TPP. Rather, it will offer the Japanese government meaningless concessions that cost them nothing like abandoning the rice import quota, and will likely put on a show of claiming that the Japanese government has won for its agricultural industry in order to secure the approval of the Diet that will reduce the tariffs on US beef and pork.

But what is your assessment of the situation, dear reader?