Blockchain and traceability:Expectations are high for the applicability of the new technology to ensuring food safety

The article was originally posted on Webronza on April 11, 2019

As a frequent attendee at symposia concerning agriculture or food in the West, I have recently noticed that "blockchain and traceability" is increasingly higher on the agenda along with genome editing and the application of AI and robotics. This recent development represents growing expectations that the application of blockchain technology to the traceability of farm and food products could help to increase added value for farmers and improve food safety.

This topic was taken up at most such symposia over the past year, including the Outlook Forum organized last February by the US Department of Agriculture (USDA).

I, for one, published a paper on the applicability of blockchain technology to the agriculture and food sectors two years ago, in June 2017, from the Research Institute of Economy, Trade and Industry (RIETI). This paper is titled "IT and AI Technology and New Agricultural Management" (in Japanese). The paper is a rough sketch of my ideas rather than a product of detailed research based on ample literature and information.

Given that blockchain technology is applied to virtual currencies as much as it is today, however, it must be no coincidence that actors in the agriculture and food sectors have noticed the potential of the new technology in these sectors.

As the technology attracted so much attention, I noticed some potential problems with its application.

This article expounds on this topic and discusses some of the problems that I have identified so far. Although many self-proclaimed experts enthusiastically discuss this topic, they often seem rather idealistic and reluctant to engage in a down-to-earth discussion.


What is a blockchain?

"Blockchain" is a distributed ledger technology. It refers to a kind of database that stores data by generating a data unit called a "block" (a batch of transaction records), and linking such blocks like a chain. Open to any transaction participant, a blockchain links the record or data of the transaction by such a participant with that of transactions preceding and following that transaction.

Food is distributed among final consumers in a chain-like structure that involves farmers, processors, wholesalers, and retailers--a structure described as a food chain. I hit upon the idea of applying blockchain technology to food distribution from the term "food chain," which probably conjured up a similar image for many others as well.

A blockchain has the major advantage of high level of security against data alteration. In a structure where several blocks are linked together, any data alteration can be detected in no time because the block where such an alteration occurred becomes inconsistent with the preceding and following blocks.

Any piece of information that has been entered into a blockchain cannot be changed unless all participants in that blockchain change their information accordingly. Moreover, a blockchain, if it is open to the public, is subject to external real-time monitoring. Experts say that such a mechanism makes data alteration almost impossible.

Food distribution in Japan has been plagued by wrongdoings. In 2008, it came to light that food-related businesses bought "tainted rice" that the government offered as a paste material for giveaway prices and resold it as food for much higher prices. There has also been a practice of collecting food products that have passed their best-before dates, altering their best-before date labeling, and reselling them.

I thought that the application of a blockchain to the food chain would help to avoid such wrongdoings in food distribution.


What is food traceability?

The term "food traceability" is often used to refer to a "system designed to be able to trace the production history and location of food products from both upstream and downstream in the food chain by recording and maintaining information on the producers and production processes of farm and dairy products as well as information on food processing and distribution."

Food traceability enables the prompt identification of the causes of safety or other problems when they occur, the timely recall of faulty products only, and the continued provision of other products through safe routes.

To illustrate this point, let us suppose that a consumer has suffered food poisoning after eating a yogurt product that turns out to have been contaminated with germs in the processing plant. Food traceability allows the retailer of this particular yogurt to trace the product upstream to identify the milk and dairy product manufacturer from which the retailer bought the product as well as the processing plant that manufactured it. If the germ-contamination is found to have been caused by temperature control failure in the plant and the date when it was occurred is identified, the plant can recall all the yogurt products produced on that date, including those sold to other retailers.

Since a food traceability system is chiefly aimed at identifying the cause of a problem with a food product from downstream to upstream, product information must be recorded at the production, processing, and distribution stages. This entails a huge cost.

Such a cost becomes higher if the distance between production and consumption is longer and the number of business operators involved is larger. The introduction of a traceability system for labeling purposes requires product identification and record keeping at each phase of transaction as well as at the stages of processing, packaging, storage, and shipment. Moreover, the process of checking whether the record is kept properly at each phase and stage of distribution takes enormous time and effort.

As such, producers and exporting countries tend to oppose the introduction of such a regulation by citing the higher cost involved.

This aspect is another reason why I paid attention to the new technology.

As explained above, food traceability originally represents an attempt at improving food safety.

The producers of organic farm products in particular have high expectations for food traceability, without which whether a farm product is organically produced or not cannot be verified. This must be the main reason why US retailing juggernaut Walmart is teaming up with IBM and universities and other research institutions to implement blockchain technology for food traceability.

Walmart is trying to implement blockchain technology for the traceability of leaf vegetables such as lettuce and spinach.

Similar attempts are being made in Japan although they stop short of applying blockchain technology. For example, a frozen vegetable processor uses bar code technology to secure traceability in its food chain, from contracted farmers to its processing plants to supermarkets.

Speaking at a USDA forum last February, a beef farmer proudly proclaimed that he applies food traceability in exporting and selling his products in Taiwan.


Processing stands in the way of food traceability

The problem is not with blockchain technology; it lies within food traceability itself. Let me expound on this.

Wheat cannot be consumed by humans as is. Therefore, the typical wheat food chain is made up of grain traders, which gather wheat from farmers and store it in large silos; millers (such as Nisshin Flour Milling), which grind wheat into flour; processors (such as Nissin Food Products), which turn flour into final products such as bread, spaghetti, ramen, and udon; and retailers such as supermarkets, which sell these products to consumers (see the chart below).

Let us suppose that a consumer who has eaten spaghetti gets food poisoning as a result. The manufacturer of this particular spaghetti buys flour from millers A, B, and C. If flour lots from these millers are mixed together in a warehouse of the spaghetti manufacturer, it is impossible to identify the lot that contained the contaminated wheat.

In short, the fragmentation of traceability information at these transaction phases makes it impossible to trace back to the producer of the responsible wheat grains from the consumer. This is because the responsible product is mixed up with the products of other producers in a large distribution system and because the processing process transforms the product itself.

In fact, such a problem can occur with most farm and food products. Take pork, for example. We do not eat pork as is. If a processing plant uses pork from a number of different producers at the same time to produce ham or sausages, the processing plant has no way of tracing back to the responsible producer upstream. Milk is no exception either. If raw milk from several dairy farmers is mixed up in a tank, it is impossible to identify the responsible producer.

At the USDA forum, the proud beef farmer was challenged by a USDA official, who questioned the applicability of a traceability system to farm products such as wheat that are distributed in bulk while admitting such applicability to beef. The beef farmer answered that grains are no different. The USDA official seemed to have a far better understanding of the problems with food traceability technology.

Blockchain technology and food traceability technology are based on different assumptions. Blockchain-based currencies such as Bitcoin assume no individuality. My virtual 10,000-yen bill and your 10,000-yen bill are the same in value and all the other aspects except ownership. Food traceability, on the other hand, assumes that food products are all different. In a food poisoning case, for example, the onigiri (rice ball) I ate might have been different from the onigiri you ate in that only the former might have been contaminated or vice versa.


Potential of a breakthrough

Most self-proclaimed experts in "blockchain and traceability" talk about dreams and possibilities; few of them conduct experiments on this topic. It seems that only one major IT company is actually trying to apply blockchain technology to food traceability in the world.

I asked two different officials of this company I met on different occasions--at a symposium in London and another in San Francisco--how the company will solve the problem mentioned above. Both officials frankly admitted the problem with food traceability. One official told me that solving the problem might require another technology such as DNA profiling. The introduction of DNA profiling, however, will sharply push up the cost of a food traceability system.

Although I was one of the few who first advocated the applicability of blockchain technology to food traceability, it seems that I ended up pouring cold water on the issue at the time when it became a hot topic.

Nevertheless, this technology has the potential to bring about a breakthrough in improving food safety. Serious discussion is needed to fulfill this potential. Although this topic is causing heated discussion in the West (which may not go any further, however), it is unfortunate that few researchers or government agencies in Japan seem to be giving serous thought to it. 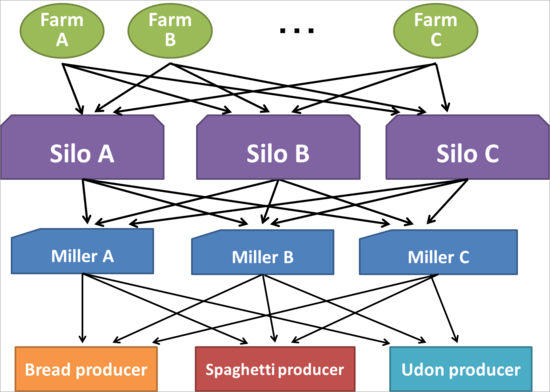 (This article was translated from the Japanese transcript of Dr. Yamashita's column in "Webronza" on April 11, 2019.)