Will Japanese agriculture be able to survive?

Agriculture is a typical example of this. Even if the government tries to protect the domestic market with tariffs, the agricultural sector will still shrink due to the decrease in population. The only way for Japanese agriculture to survive is to strike out into overseas markets. However if the tariffs in export markets are high, Japan will not be able to export. Therefore Japan has to enter willingly into negotiations for a free trade agreement, such as the TPP, which lower import tariffs. Free trade is necessary for Japanese agriculture to survive.

A general evaluation of the TPP

So called commentators or analysts promulgated the view that there would be considerable adverse effects on the Japanese economy and society if Japan were to join the TPP negotiations. The Japanese agricultural sector, who wanted to avoid the abolishment of tariffs, agreed to this opinion. However people with expertise of international commercial negotiations and their relevant issues could easily see through the falsity of their view.

For example, those against free trade said that Japan will lose tariff autonomy. However, at present, there is no country with tariff autonomy due to the GATT and the WTO agreements which set the limit of tariffs. (For example, Japan agreed to zero tariffs on cars and flowers.) They also said there would be negative effects on the Japanese universal healthcare system, but government services were excluded from the scope of General Agreement on Trade in Services in the WTO, and also in the TPP agreements. Regarding their view that there would be negative effects on the safety of foods, this is impossible as the framework of the WTO・SPS Agreement cannot be changed in the TPP since it is based on a very delicate balance of importing and exporting countries of food. Also, there was a view that the US would force their safety standards onto other countries. However this lacked fundamental knowledge of international law that the international society consists of sovereign nations. I debated on TV with a lawyer who opposed Japan joining the TPP negotiations and claimed that the safety standards of food in Japan will be changed due to the ISDS clause, which allows enterprises to sue nations. In this case, however, he misunderstood one of the fundamental notions of international economy law, "national treatment" completely. He understood it oppositely.

There are numerous issues like the above. If I were to show the result that their predictions are wide of the mark after the TPP negotiations are over, I could write a book on how Japan can be fooled by those who do not have any expertise. During the administration of the Democratic Party of Japan, there were lengthy discussions at meetings over whether Japan should participate in the TPP negotiations. A member of the party who is well informed about diplomatic issues said "The TPP would neither boost Japanese economic recovery nor damage the Japanese economy badly". When I heard this, I was impressed by the fact that there was someone in the Democratic Party of Japan who understands the situation correctly. I think Japan would be ashamed to be so scared of the TPP negotiations as not toparticipate , when even developing countries such as Vietnam or Malaysia participate willingly. The TPP was not such a big issue for Japan after all.

An evaluation of the agreement regarding agriculture in the TPP

There was an opinion that high tariffs are necessary due to the small scale of Japanese agriculture and inability to compete with the US or Australian agriculture. However, although the scale of the US is 1/18 of Australia and the scale of the EU is 1/13 of the US, 1/218 of Australia, both the US and the EU are grain exporting countries. Six to eight of the world top 10 exporting countries of agricultural products belong to the EU.

Nevertheless an opposition movement by groups who wanted to avoid the abolition of tariffs on agricultural products might have been successful. The Japanese government maintains tariffs on rice, wheat, main dairy products and sugar and restricts the damage to the reduction of tariffs on beef and pork in the TPP negotiation. As a result, the TPP does not hurt Japanese domestic agriculture except for some dairy products.

Tariffs such as the 3% on carrots, 8.5% on onions, 8.5% on cherries, 16% on oranges and 17% on apples will be abolished. However the yen has depreciated by 30% against the dollar in two years. Products which used to be imported at 100 yen are imported at 130 yen. Even if tariffs under 30% are abolished, it does not hurt Japanese agriculture. The same is true regarding the tariff on beef, in spite of the reduction from 38.5% to 9%. Regarding pork, there is a complicated tariff system composed of minimum price and ad valorem tariff. Traders have taken advantage of it, paying the minimum amount of tariff which corresponds to the tariff under minimum price and ad valorem tariff, that is 4.3% of what is called the gate price. Even if this tariff becomes zero, it will not have a significant negative effect on Japanese pork industry. On the issue of rice, the import quota was expanded but the Japanese government purchases the same amount of domestic rice as imported rice, sets aside from the market and uses it as emergency stock. Accordingly this will not affect Japanese domestic market although Japan has to take on the financial burden.

However countermeasures will be taken in spite of there being no damage from the TPP. For example, the price of a calf in the market is more than the double of the costs to raise one from birth. In spite of the excess profit accruing to calf farmers, the Japanese government will expand the subsidy system for fattening farmers who buy a calf at the extraordinarily high price so that they may not incur losses. The subsidy system for a calf farmer tries to compensate for the loss caused by the decrease of the price of a calf because fattening farmers faced with the fall of the price of beef by liberalization of beef trade could not afford to pay the price which guarantees the reproduction of a calf. When calf farmers are compensated for the decrease of a calf price, there would be no need for any subsidies for fattening farmers since they do not pay high prices for calf farmers. This subsidy for fattening farmers, however, allows them to pay higher prices for calves than otherwise. Calf farmers enjoy unnecessary profits or bonanza. As a countermeasure against beef liberalization, the Japanese government has poured in 2.5 trillion yen on the pretext of improvement in production of beef and calves. However rationalization in the livestock industry has not progressed. The Japanese government has not reflected on this at all.

In short, the Japanese government thinks haphazard fiscal policy which delivers money to each and every farmer is a good idea for the sake of gaining farmers' votes. After all, Japanese livestock which lives on corn produced in the US will be all-but wiped out in a food crisis without any imports of corn. No one in the Japanese agricultural sector discusses whether there is any argument for the support of measures to protect the Japanese livestock industry.

There were some points in the TPP agreement which can greatly damage the Japanese national interest.

First, the 2.5% tariff on automobiles produced in Japan will not be abolished for 25 years due to Japan's stubborn demand for exceptions to the elimination of tariffs on agricultural products.

When a government spends public money to carry out a policy, it generally offers people goods or services at a low price. However, regarding rice as a staple food, consumers are paying 600 billion yen caused by the rise in rice prices, on top of the 400 billion yen financial burden caused by the Acreage-Reduction policy. I can not see the advantage of guaranteeing the farming income of part-time farmers who work less than 30 days a year on farmland and make only a small amount of income out of farming rice. The Japanese government should subsidize only struggling full-time farmers.

Third, Japan had lost an opportunity for agricultural reform. There is a well-known saying in economics: "The Tariff Is the Mother of Trusts." Without a tariff, Japan cannot maintain a domestic price higher than the international price. In fiscal year 2014, the price of domestic rice turned out to be lower than the price of California rice. If Japan abolished the Acreage-Reduction policy and lowered the price of rice further, Japan could exported a huge amount of rice.

Graph 1 Comparison of the price of rice 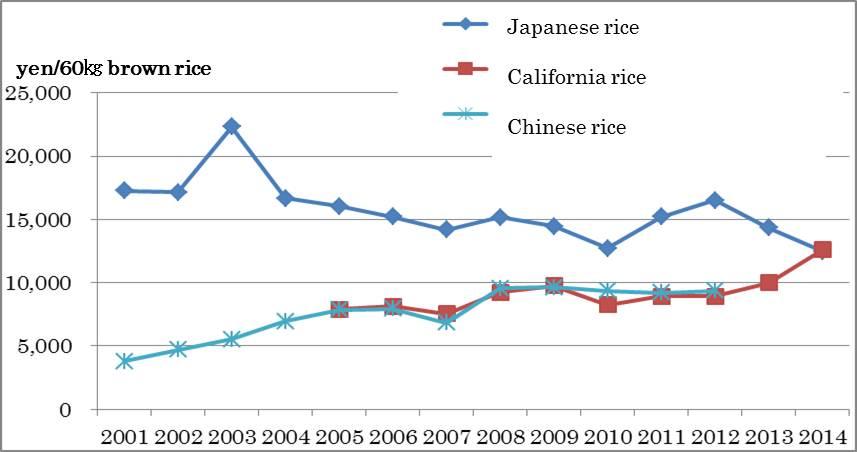 The measure which maximizes welfare in the national economy is free trade with no tariffs, reducing the burden on consumers, and protecting agriculture with compensation paid directly from public finances to full-time farmers. Except for backward-thinking Japanese agricultural economists, agricultural economists around the world, such as the OECD, recommend this measure.

If Japan abolishes the Acreage-Reduction policy and lowers the price of rice to 75,000 yen (per 60kg) where supply and demand for rice is evenly balanced, small scale, part-time farmers who cannot live on the revenue from selling rice will quit farming and rent out their land to full-time farmers. If more efficient full-time farmers take over that land and expand in scale they will become more cost-efficient. Not only expansion of scale, but also a raise of the unit yield can cut costs. However the unit yield of Japanese rice is suppressed due to the Acreage-Reduction policy which demands less rice production and is lower than that of California rice by 40%. If Japan abolishes the Acreage-Reduction policy and grows a variety of rice which can achieve the same level of yield as California rice, Japan will be able to reduce costs to around 40% of their current level. The average production costs for farming rice can be cut by 50 to 60% with an expansion of scale and an increase of the unit yield.

Graph 2 Comparison of the unit yield 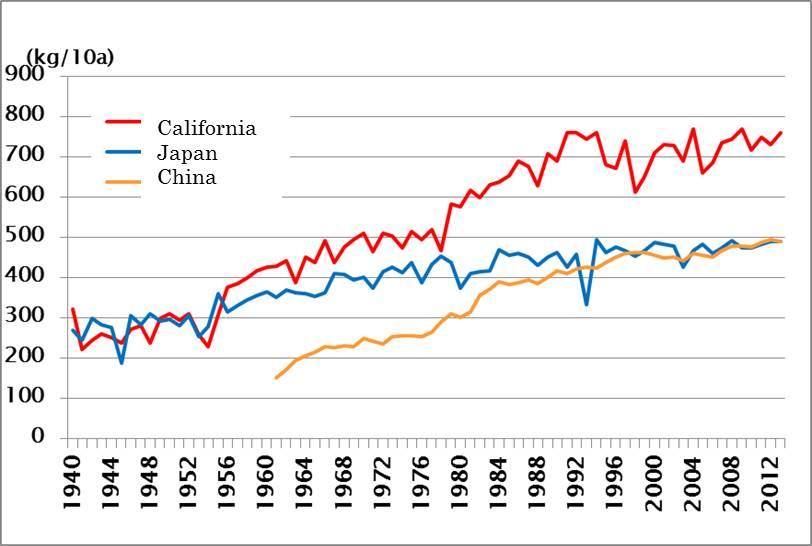 If imports of agricultural products from overseas were to stop, Japan could consume rice designated for export to avoid hunger. The amount of rice for export can be a cost-free stock in the case of a food crisis. Additionally, if Japan makes full use of paddy fields, farmland which is indispensable for food security is secured. Free trade becomes a basis of the security of food and has other positive features, for example the reduced use of agricultural chemicals, mainly by full-time farmers, which has environmental benefits.

Bread will be the staple food in Japan

In 2011, Japanese family expenditure on bread was higher than that of rice. Control of the wheat price and the continuing high price of rice due to the Acreage-Reduction policy has caused a fall in consumption of rice and an increase of consumption of products from wheat such as bread. As a result of this TPP negotiation, the price of wheat will be lowered. On the other hand, the Acreage-Reduction policy, which reduces the supply and maintains a high price of rice, is strengthened. The production of rice which was 12 million tons in 1994 has been declining year by year, and the target amount of rice production in fiscal year 2016 is 7.43 million tons which is 80,000 tons less than the previous year. The Ministry of Agriculture and agricultural cooperative of Japan are desperately trying to reduce rice production. In the near future, the target amount of rice production will be under the amount of wheat consumption: 6.6 million tons. The ones who control Japanese agriculture are the ones destroying Japanese agriculture.

(This article was translated from the Japanese transcript of Dr. Yamashita's column.)