IIST e-Magazine on February 28, 2014（"The TPP and Agricultural Revitalization" Part 4 of 5）

Rice prices have continued to rise since the 1960s, but obstacles have been placed in the way of reducing costs by increasing scale and boosting yield. If Japan abolishes its reduced rice acreage scheme to bring down rice prices and institutes direct payments to full-time farmers, this will stimulate structural reform and open the way for major cost reductions. As a result, Japan will be able to export its rice, which already enjoys an international reputation for quality.

With the graying of society and population decline expected to shrink the domestic market, exporting is the only way that Japan will be able to maintain and energize its agriculture.

While both fruit and vegetables are currently exported, they pose problems in terms of shelf life. What product has an excellent shelf life and can be exported in large quantities? What has a production capacity far beyond domestic demand so that production is adjusted and, if it were not, has the potential for large-scale production and export? What product has Japan fostered for thousands of years and has a strong reputation in even international markets? The answer is obviously rice. If full-scale rice exports were launched, Japan would be able to make great strides as a country powered by agriculture.


The need for structural reform

Given the natural conditions with which Japanese agriculture is blessed, this is not impossible either physically or in terms of capacity. Japan's agricultural administration, which should promote agriculture, has to date blocked the advance of rice farming. Back in 1961 when the Japanese diet was already becoming Westernized and rice consumption was forecast to decrease, given that rice sales seemed unlikely to grow, the Basic Law on Agriculture set out to boost scale as a means of cutting costs and increasing rice farmers' income.

The cost of one bale of rice (60 kilograms; below, yield) is calculated by dividing the cost per hectare of inputs such as fertilizers, agrichemicals and machinery by the number of bales which can be harvested per hectare. The rice production cost (the actual material cost) for large-scale farms (6,378 yen per bale for farms 15 hectares or larger) is less than half that of micro-farms (15,188 yen for farms of 0.5 hectares or less) (as at 2011). If yield doubles, the cost will halve. In other words, if production scale is expanded and yield improved, the cost will fall and income will rise.

As the figure shows, the income earned by farms of less than one hectare, which are the norm in prefectures around Japan, is almost zero. Whether zero income is multiplied by 20 farms or 40 farms, it remains zero. If villages with 20 hectares of farmland were to entrust all that farmland to one farmer to cultivate, that farmer could produce an income of 14.5 million yen. Dividing this among all farmers as rent would benefit the entire village. Those receiving rent wouldn't just be sitting idle. In return for the rent they receive, their job would be to maintain and manage the farmland and waterways comprising agricultural infrastructure. In other words, the structural reform of agriculture will also be critical in energizing farming villages. 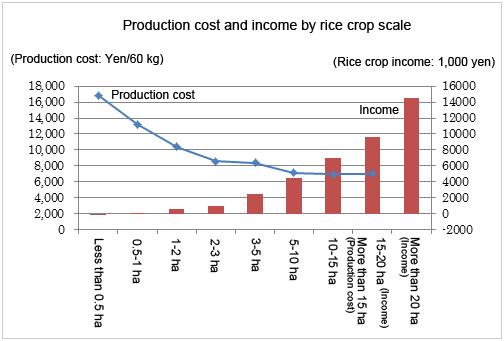 However, increasing the scale of farmland to a certain level will require reducing the number of households engaged in farming. Japan Agricultural Cooperatives, or JA, wants to maintain the number of rice farmers, who comprise the bulk of its membership, and consequently opposes such a structural reform. Back when the food control system was in place and the government bought up farmers' rice, JA embarked on a major political campaign to raise the price of government-purchased rice.

The rice price hike has meant that even micro-farmers who would normally exit the market because of their high costs have kept farming because it is still cheaper to grow their own rice than to buy expensive rice from retailers. Because micro-farmers have not put forward their land, farmland has not concentrated in the hands of real farmers trying to make a living from agriculture, keeping the scale of farmland limited. The sales share of full-time farmers whose main income is from farming is 95 percent in the case of dairy farming and 82 percent for vegetables and field crops, but an extremely low 38 percent for rice alone. In other words, it is the fault of Japan's agricultural administration that no progress has been made on the structural reform of rice farming.

The rice acreage reduction scheme is essentially a cartel whereby producers jointly reduce their rice production. In any other industry, such a cartel would infringe the Anti-trust Act, but in the case of rice, a subsidy of around 200 billion yen per annum, or a cumulative total of eight trillion yen, has been paid out to sweeten farmers' participation in the scheme. The DPJ administration went even further, introducing as of FY2010 income compensation of 150,000 yen per hectare on the condition of scheme participation. The policy change introduced by the LDP government in 2013 will eliminate that income compensation in five years but not the rice acreage reduction scheme, seeking instead to expand the traditional rice acreage reduction subsidy. If that scheme was eliminated, the rice price would fall, removing the need to insist on maintaining tariffs in the TPP negotiations.

It has also become difficult to reduce production costs. If yield increases while gross consumption remains the same, the amount of land needed for rice production will shrink. In that case, more land would need to be made subject to the rice acreage reduction scheme, boosting the amount paid out to farmers in rice acreage reduction subsidies. As a result, improving rice strains to boost yield has become a taboo subject at government research institutes. The average yield for Japanese rice is now 40 percent less than that of Californian rice. If the rice acreage reduction scheme was abandoned and yield lifted to the same level as Californian rice, production costs would shrink by 30 percent. Strains with a greater yield than Californian rice have already been developed and are under cultivation by some full-time farmers. However, when JA gives rice seedlings to part-time farmers, it makes no attempt to adopt these seeds for fear that increased production will lower the rice price. 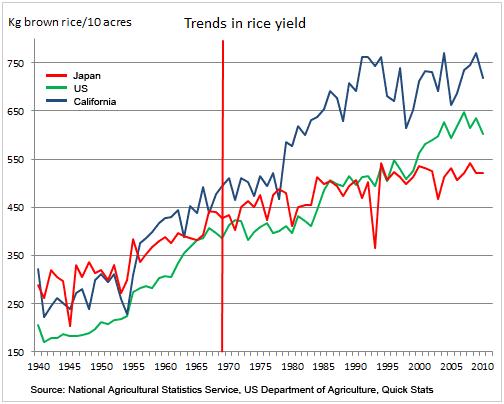 The bottom line in this graph below shows the import price of the Chinese rice which Japan is in fact importing. The middle line shows the price at which that rice is being sold in Japan. The difference between the top line, which shows the price of Japanese rice, and the middle line represents the difference in quality as manifested in price. Moreover, because the 13,000 yen price of Japanese rice is the level resulting from limited production under the rice acreage reduction scheme, if that scheme was abolished, the price would drop to around 8,000 yen, making Japanese rice cheaper than Chinese rice, which would eliminate the need for tariffs.

While China is currently exporting rice to Japan, China's biggest internal political issue is in fact the growth of per capita urban income to 3.5 times the level of rural income--the so-called "three agricultural issues". As China resolves this issue, the labor costs of the Chinese rural sector will rise, accompanied by higher prices for agricultural produce. This will increase the price competitiveness of Japan's agricultural produce.

If Japan were to abandon the rice acreage reduction scheme and Japanese rice dropped to 8,000 yen even as the price of Chinese rice rose to 13,000 yen, trading companies buying rice in the Japanese market at 8,000 yen and exporting at 13,000 yen would make a profit. As a result, domestic supply would decline and the domestic price would rise to the same level as the export price, expanding domestic rice production. If the TPP were to create a situation in which there were no tariffs, Japan would no longer be able to maintain the domestic price cartel embodied by the rice acreage reduction scheme, which currently keeps the domestic price higher than the international price. 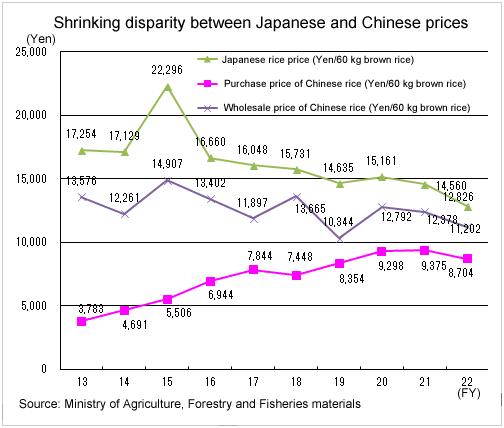 Getting rid of the rice acreage reduction scheme would bring down the price of rice, leading part-time farmers to rent out their land. If direct payments were made only to full-time farmers working land of at least a certain scale, those farmers would be more able to pay land rents. Farm land would then concentrate in the hands of full-time farmers, expanding scale and reducing costs. The rice production cost for farms of 15 hectares or more is 6,378 yen. Where elimination of the rice acreage reduction scheme enabled yield to rise to the level of Californian rice, the production cost would drop by 30 percent to 4,556 yen. This would be less than half of the national average of 9,478 yen.

Even at the current price and cost, some producers are emerging who export rice to Taiwan, Hong Kong and elsewhere. If rice with the highest quality in the world is given price competitiveness through the higher productivity enabled by expanded scale and increased yield, Japanese rice would indeed enjoy a decisive advantage. Disposing of the rice acreage reduction scheme would open the way for Japan's rice industry to dominate world markets on the strength of its high quality. It would be a rebirth for Japanese agriculture achieved through exports.

Exporting to open up offshore markets will be critical in maintaining and energizing Japanese agriculture. When exporting, given a choice between 100 percent tariffs and zero tariffs in trade partner countries, obviously zero tariffs are preferable. No matter how hard domestic industry works to reduce costs, it will not be able to export if tariffs are high in the countries to which it is attempting to export. If Japan does not participate actively in trade liberalization negotiations like the TPP which eliminate tariffs in trade partner countries and facilitate exports, Japanese agriculture will inevitably decline. The TPP is therefore vital for agriculture as well. The correct policy here will be to bring down prices by eliminating the rice acreage reduction scheme and to make direct payments to full-time farmers. What we should be protecting is agriculture, not a particular means such as tariffs or an organization like the JA.

China is a promising market for both Japanese industry and agriculture. The argument has been made that Japan should prioritize a Japan-China-Korea FTA over the TPP. However, while China's one-percent tariff rate means that Japan is currently theoretically able to export to China, it is in fact no easy task. Where Japanese rice can be purchased in Japan at 400 yen per kilogram, the same rice costs 1,300 yen in Shanghai because of the stiff margin taken by China's state-owned enterprises (SOEs), which have a monopoly over distribution. Even if tariffs are reduced to zero, to the extent that de facto tariffs like these remain, countries cannot export freely.

What the US is seeking to achieve through the TPP is regulatory discipline over China's state-owned enterprises. As Vietnam is similarly a socialist country with SOEs, the US is negotiating with Vietnam as a 'virtual China', working to impose the regulatory discipline that will pertain if China too eventually joins the TPP. Even if Japan calls for China to regulate its SOEs as part of a Japan-China FTA, China is unlikely to comply. Japan needs to use US muscle to bring these SOEs into line. Participation in the TPP will also provide a road into the Chinese market.