The Error of Anti-TPP Arguments

IIST e-Magazine on January 31, 2014（"The TPP and Agricultural Revitalization" Part 3 of 5）

Agriculture will not be destroyed even if tariffs are removed

The current tariff system emerged as a result of the GATT Uruguay Round negotiations which were concluded in 1993. At the time, Japan's agricultural product imports comprised two categories: items which could be imported freely to the extent that a tariff was paid; and those subject to quantitative restrictions, whereby a ceiling was placed on import volume. In neither case were tariffs particularly high.

To protect domestic agriculture, these tariffs covering the international price differential were set as high as possible by using comparatively cheap international prices. In the case of rice, what was used was not the price of short-grain rice like Japanese rice, but rather of long-grain Thai rice. Thus, a tariff of 402 yen per kilogram was set. The current tariff has been reduced 15 percent down to 341 yen in line with the Uruguay Round agreements, which is still well above the domestic price of 230 yen. Even if, for example, the price of imported rice was zero, once the tariff was paid it would still be impossible to compete with domestic rice. This is an excessively protective tariff.


Does Japan have a low level of agricultural protection?

Agricultural economists who emphasize agricultural protection are strangely insistent that Japan has limited agricultural protection. If protection is limited, it would surely be no problem to eliminate tariffs, and the amount needed if government funds were used instead to protect farmers would also be limited. However, there is a parallel and contradictory argument that tariffs are necessary and that the fiscal burden after tariff elimination would be huge.

However, first of all, these arguments ignore the characteristics of Japan's method of protecting agriculture, which is not to provide subsidies out of government funds but rather to set high prices underpinned by tariffs. In other words, they are trying to compare the relative extent of protection based on fiscal spending alone, when fiscal spending plays only a small role in Japan's protection. 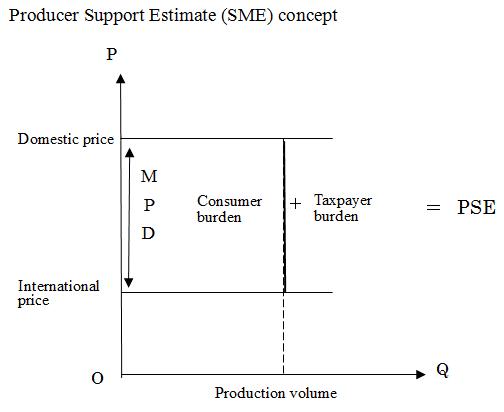 The OECD-developed agricultural protection index Producer Support Estimate (PSE) comprises two components: the taxpayer burden, whereby farmer income is maintained through fiscal spending, and the consumer burden, which is equivalent to the amount of production volume multiplied by the difference between domestic and international prices, and is the amount of income transferred to farmers as a result of consumers paying farmers not the cheap international price but rather the expensive domestic price.

According to the OECD, the ratio of the PSE, or agricultural protection, to total farm receipts (percentage PSE) as at 2011 was 7.7 percent in the US and 17.5 percent in the EU, but an extraordinarily high 51.6 percent in Japan. Further, compared to 1999 when all countries had high levels of protection, in recent years, both the US and the EU have shrunk that percentage markedly-from 25.5 percent down to a third of that level in the US, and from 38.2 percent down to half that level in the EU. Japan, by contrast, has only seen a slight reduction from the 1999 level of 59.9 percent. 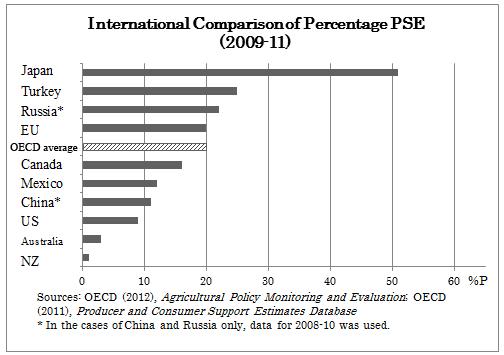 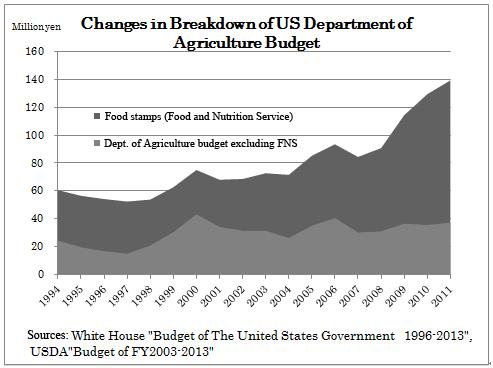 Where approximately 30 percent of the food that consumers currently buy is from restaurants and 50 percent processed food products, fresh food is down to only 20 percent. Until 20 years ago, agriculture and fisheries accounted for 22 percent of the GDP of food-related industries but this has now dropped to 12 percent (2009). In 2009, the percentage distribution for food-related industries was 39 percent processing industries, 26 percent distribution, 22 percent restaurants, and 12 percent agriculture and fisheries.

However, because agriculture continues to emphasize fresh products in its sales strategy, it is losing the capacity to supply agricultural produce that meets the needs of the food processing and restaurant industries in terms of price and quality. MAFF too has kept tariffs high for agricultural produce as fresh food, while blithely slashing tariffs for confectionery and other processed foods.

Confectionery manufacturers and other makers of finished products have low tariffs placed on their products, but all their raw materials--rice, wheat, sugar, starch and dairy products--are protected with high tariffs. Even if imported agricultural products are used as raw materials, the high tariffs levied on them still make raw materials expensive. This places domestic manufacturers at a huge competitive disadvantage against products from overseas which face only low tariffs. Domestic manufacturers are left with no choice but to go offshore for their raw materials and process them there, exporting the finished products back to Japan. As a result, Japanese agriculture has lost an important customer for its own products.

The root of the problem lies with the agricultural administration that has protected agriculture with high tariffs. If our means of agricultural protection was shifted from price support and tariffs to direct payments from government funds, the problem would be resolved and demand for domestic agricultural produce too would grow.