Why Are Trade Negotiations Always Blocked by Agriculture in Japan?

IIST e-Magazine on December 27, 2013（"The TPP and Agricultural Revitalization" Part 2 of 5）

While protected by high tariffs, agricultural production amounts to only a twelfth of automobile industry production. So why is agriculture so influential in Japan's TPP negotiations? Why can't Japan adopt the same approach as the US and Europe and protect agriculture with direct payments rather than high tariffs?

The Liberal Democratic Party and the Diet agricultural committees have adopted resolutions urging the government to have Japan's rice, wheat, beef and pork, dairy products and sugar exempted from the tariff elimination in the Trans-Pacific Partnership (TPP) agreement and to leave the negotiating table if unable to do so. The value of agricultural production protected by high tariffs is around four trillion yen, only a twelfth of the automobile industry, and yet it is agriculture that is dominating Japan's TPP negotiations.

However, what those tariffs are really protecting are high domestic prices for agricultural products--in other words, food prices. For example, to protect the high price of domestically-produced wheat, which accounts for only 14 percent of total consumption, tariffs are levied on the foreign wheat that accounts for the other 86 percent, forcing expensive bread and udon noodles upon consumers.

Many politicians opposed the consumption tax hike on the grounds that it would make food more expensive for poor people. A reduced tax rate for food products is also being considered. Yet politicians seem to believe that keeping food prices high with tariffs serves the national interest. Unlike Japan, the United States and Europe have shifted away from the policy of price support enabled by high tariffs to a policy of making direct payments to farmers out of government coffers, protecting agriculture while also supplying agricultural produce to consumers at low prices. Why can't we do the same thing in Japan? When agriculture could be protected with direct payments, why does maintaining agricultural tariffs, as well as the high price of agricultural products protected by those tariffs, translate into the national interest? 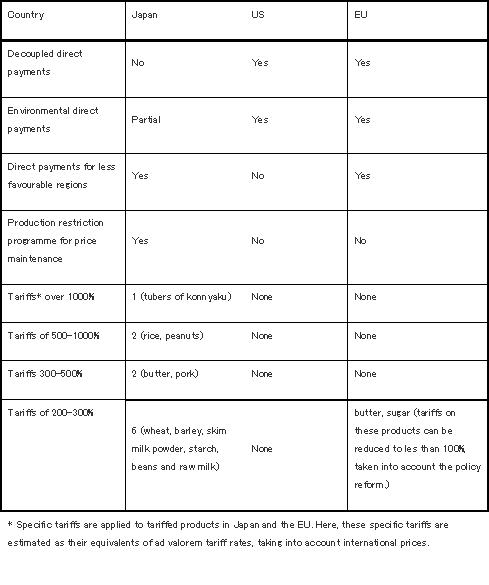 The answer is an entity which exists in Japan but not in the US or Europe--the interest group Japan Agricultural Cooperatives, or JA.

The US and Europe also have agricultural cooperatives, but these are cooperatives specialized in one or some of the activities such as sales, material purchases or other aspects related to a particular agricultural product or product group, or providing financial service to farmers. Neither region has anything like Japan's JA, which has a hand in everything from banking, life insurance and accident insurance for farmers and non-farmers alike to sales of all agricultural products and materials, as well as the supply of daily commodities and services. Not only is JA alone among cooperatives, there is also no other corporate body or legal person in Japan that can match it. Banks are prohibited from engaging in outside business, and life insurance companies can't handle accident insurance and vice versa. JA Bank Group deposits grew to 88 trillion yen in FY2012, making this mega-bank the second largest in Japan. The gross worth of JA's insurance operations is 47.6 trillion yen, up alongside the 51 trillion yen of Nippon Life, Japan's largest life insurance company. Even in terms of its sales of agricultural produce and daily commodities, JA compares with middle-ranked general trading companies. JA is in fact probably Japan's largest corporate group. However, when agriculture seems locked into a downward trajectory, why does the agricultural cooperative JA continue to thrive?

JA possesses more than just economic might. When agrarian reform gave ownership of farmland over to tenant farmers, it produced firmly conservative rural communities which JA then came along and organized. It would be no exaggeration to regard JA's action as seminal in the many years of stable ruling subsequently enjoyed by rural-backed conservative forces. As Japan's biggest postwar lobby group, JA has boasted massive political strength. When rice prices fall, JA uses that power to force the government to buy rice on the market to push the price back up. It is political muscle that stands as JA's greatest management asset.

In the years of the food control system, which continued through to 1995, a policy was maintained of protecting farmers' income by setting a high price on the rice which the government bought from farmers via JA. Even after that system ended, rice prices have been kept high through the rice acreage reduction policy, whereby farmers are given a subsidy for reducing their rice production.

Thanks to steep rice prices, numerous inefficient part-time micro-farmers have remained in the rice industry instead of letting go their land, because it is still cheaper for these part-time farmers, even given micro-scale operations and high production costs, to grow their own rice than buy expensive rice in town. As a result, farmland has not accumulated in the hands of full-time farmers trying to make a living out of farming alone, so it has been difficult for them to expand the scale of their operations to bring down costs and boost profits. The high cost of rice has also reduced rice consumption. With both production and consumption impacted by the high rice price policy, the rice industry has declined.

After the war when food was scarce, JA underwent a facelift from its wartime role of control body of rural communities to agricultural cooperatives because the government needed JA to deliver rice from farmers to the govenment. Where agriculture, and particularly rice farming, is in decline, it is ironic that an organization essentially built on rice farming should have come so far. Indeed, it would probably be more correct to say that JA has been able to flourish because of the decline of rice farming.

The figure below shows that, among the various forms of farming, only rice has an extremely limited share of agricultural income but an unusually high ratio of non-farming income (income from other work) and pension payments. Looking at average figures for rice farmers, where farmer income stands at 4.41 million yen, 480,000 yen of this is farming income, 1.89 million non-farming income, and 2.04 million yen pension income. In other words, rice is being produced by part-time farmers and pensioners. 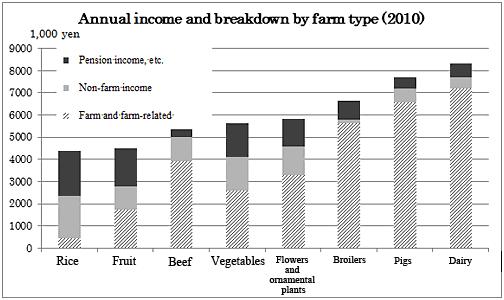 The inference from these figures is that rice is an extremely exceptional area of agriculture. In particular, with rice production falling every year and the share of rice in agricultural production now below 20 percent, the presence of part-time rice farmers is hardly a big deal in the context of Japanese agriculture as a whole. Conversely, if part-time rice farmers were to disappear altogether, it would open the way for full-time farmers to expand the scale of their operations, allowing rice farming to flourish.

However, this is an agricultural perspective, not that of JA. Whether full-time or part-time, large-scale or small-scale, all farming operations are farms, and all farmers belong to JA. For JA, it is in fact the part-time farmers who are more important. 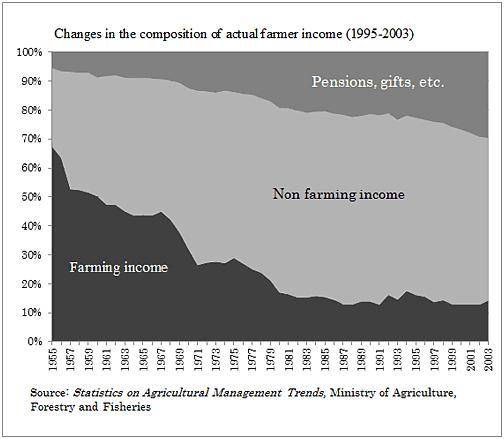 Lifting the price of rice proportionally increases JA's revenue from rice sales. For JA, the continued presence of the very part-time rice farmers who are pushing rice farming into decline has actually been advantageous. Income from part-time work, which is four times greater than farming income, as well as profits from the sale of farm land for other purposes (trillions of yen every year), is all deposited in the accounts of JA, which is permitted also to engage in banking, building JA into Japan's second-biggest mega-bank. Keeping rice prices high and part-time farmers on their farms has been the foundation of JA growth.

However, while farmers would not be affected, JA would suffer from reduced sales commission revenue as a result of the lower prices. And that's not all. In particular, if tariffs were eliminated and rice prices fell, bringing about the exit of part-time farmers and the new dominance in agriculture of full-time farmers, JA would be shaken down to its organizational foundations. Even if tariffs were eliminated, the institution of direct payments and income compensation would prevent the demise of agriculture, but JA could well be destroyed. That's why JA has launched such a fierce TPP opposition movement. The heart of the problem is not the TPP and agriculture--it's the TPP and JA.